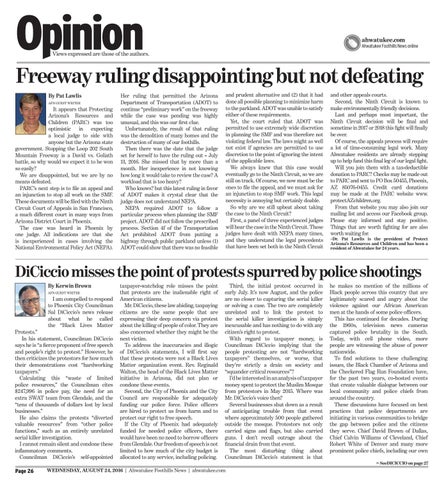 Views expressed are those of the authors.

It appears that Protecting Arizona’s Resources and Children (PARC) was too optimistic in expecting a local judge to side with anyone but the Arizona state government. Stopping the Loop 202 South Mountain Freeway is a David vs. Goliath battle, so why would we expect it to be won so easily? We are disappointed, but we are by no means defeated. PARC’s next step is to file an appeal and an injunction to stop all work on the SMF. These documents will be filed with the Ninth Circuit Court of Appeals in San Francisco, a much different court in many ways from Arizona District Court in Phoenix. The case was heard in Phoenix by one judge. All indications are that she is inexperienced in cases involving the National Environmental Policy Act (NEPA).

and prudent alternative and (2) that it had done all possible planning to minimize harm to the parkland. ADOT was unable to satisfy either of these requirements. Yet, the court ruled that ADOT was permitted to use extremely wide discretion in planning the SMF and was therefore not violating federal law. The laws might as well not exist if agencies are permitted to use discretion to the point of ignoring the intent of the applicable laws. We always knew that this case would eventually go to the Ninth Circuit, so we are still on track. Of course, we now must be the ones to file the appeal, and we must ask for an injunction to stop SMF work. This legal necessity is annoying but certainly doable. So why are we still upbeat about taking the case to the Ninth Circuit? First, a panel of three experienced judges will hear the case in the Ninth Circuit. These judges have dealt with NEPA many times, and they understand the legal precedents that have been set both in the Ninth Circuit

Her ruling that permitted the Arizona Department of Transportation (ADOT) to continue “preliminary work” on the freeway while the case was pending was highly unusual, and this was our first clue. Unfortunately, the result of that ruling was the demolition of many homes and the destruction of many of our foothills. Then there was the date that the judge set for herself to have the ruling out – July 13, 2016. She missed that by more than a month. Her inexperience in not knowing how long it would take to review the case? A workload that is too heavy? Who knows? but this latest ruling in favor of ADOT makes it crystal clear that the judge does not understand NEPA. NEPA required ADOT to follow a particular process when planning the SMF project. ADOT did not follow the prescribed process. Section 4f of the Transportation Act prohibited ADOT from putting a highway through public parkland unless (1) ADOT could show that there was no feasible

and other appeals courts. Second, the Ninth Circuit is known to make environmentally friendly decisions. Last and perhaps most important, the Ninth Circuit decision will be final and sometime in 2017 or 2018 this fight will finally be over. Of course, the appeals process will require a lot of time-consuming legal work. Many Ahwatukee residents are already stepping up to help fund this final leg of our legal fight. Will you join them with a tax-deductible donation to PARC? Checks may be made out to PARC and sent to PO Box 50455, Phoenix, AZ 85076-0455. Credit card donations may be made at the PARC website www. protectAZchildren.org. From that website you may also join our mailing list and access our Facebook group. Please stay informed and stay positive. Things that are worth fighting for are also worth waiting for. –Dr. Pat Lawlis is the president of Protect Arizona’s Resources and Children and has been a resident of Ahwatukee for 24 years.

I am compelled to respond to Phoenix City Councilman Sal DiCiccio’s news release about what he called the “Black Lives Matter Protests.” In his statement, Councilman DiCiccio says he is “a fierce proponent of free speech and people’s right to protest.” However, he then criticizes the protestors for how much their demonstrations cost “hardworking taxpayers.” Calculating this “waste of limited police resources,” the Councilman cites $247,996 in police pay, the need for an extra SWAT team from Glendale, and the “tens of thousands of dollars lost by local businesses.” He also claims the protests “diverted valuable resources” from “other police functions,” such as an entirely unrelated serial killer investigation. I cannot remain silent and condone these inflammatory comments. Councilman DiCiccio’s self-appointed

taxpayer-watchdog role misses the point that protests are the inalienable right of American citizens. Mr. DiCiccio, these law abiding, taxpaying citizens are the same people that are expressing their deep concern via protest about the killing of people of color. They are also concerned whether they might be the next victim. To address the inaccuracies and illogic of DiCiccio’s statements, I will first say that these protests were not a Black Lives Matter organization event. Rev. Reginald Walton, the head of the Black Lives Matter initiative in Arizona, did not plan or condone these events. Second, the City of Phoenix and the City Council are responsible for adequately funding our police force. Police officers are hired to protect us from harm and to protect our right to free speech. If the City of Phoenix had adequately funded for needed police officers, there would have been no need to borrow officers from Glendale. Our freedom of speech is not limited to how much of the city budget is allocated to any service, including policing.

Third, the initial protest occurred in early July. It’s now August, and the police are no closer to capturing the serial killer or solving a case. The two are completely unrelated and to link the protest to the serial killer investigation is simply inexcusable and has nothing to do with any citizen’s right to protest. With regard to taxpayer money, is Councilman DiCiccio implying that the people protesting are not “hardworking taxpayers” themselves, or worse, that they’re strictly a drain on society and “squander critical resources”? I’d be interested in an analysis of taxpayer money spent to protect the Muslim Mosque from protestors in May 2015. Where was Mr. DiCiccio’s voice then? Several businesses shut down as a result of anticipating trouble from that event where approximately 500 people gathered outside the mosque. Protestors not only carried signs and flags, but also carried guns. I don’t recall outrage about the financial drain from that event. The most disturbing thing about Councilman DiCiccio’s statement is that

he makes no mention of the millions of Black people across this country that are legitimately scared and angry about the violence against our African American men at the hands of some police officers. This has continued for decades. During the 1960s, television news cameras captured police brutality in the South. Today, with cell phone video, more people are witnessing the abuse of power nationwide. To find solutions to these challenging issues, the Black Chamber of Arizona and the Checkered Flag Run Foundation have, for the past two years, co-hosted events that create valuable dialogue between our local community and police chiefs from around the country. These discussions have focused on best practices that police departments are initiating in various communities to bridge the gap between police and the citizens they serve. Chief David Brown of Dallas, Chief Calvin Williams of Cleveland, Chief Robert White of Denver and many more prominent police chiefs, including our own >> SeeDICICCIO on page 27