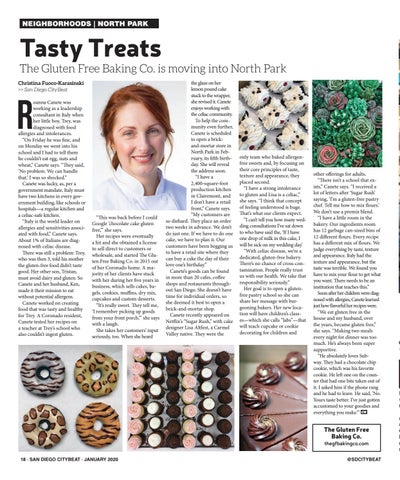 oanna Canete was working as a leadership consultant in Italy when her little boy, Trey, was diagnosed with food allergies and intolerances. “On Friday he was fine, and on Monday we went into his school and I had to tell them he couldn’t eat egg, nuts and wheat,” Canete says. “They said, ‘No problem. We can handle that.’ I was so shocked.” Canete was lucky, as, per a government mandate, Italy must have two kitchens in every government building, like schools or hospitals—a regular kitchen and a celiac-safe kitchen. “Italy is the world leader on allergies and sensitivities associated with food,” Canete says. About 1% of Italians are diagnosed with celiac disease. There was still a problem: Trey, who was then 3, told his mother the gluten-free food didn’t taste good. Her other son, Tristan, must avoid dairy and gluten. So Canete and her husband, Ken, made it their mission to eat without potential allergens. Canete worked on creating food that was tasty and healthy for Trey. A Coronado resident, Canete tested her recipes on a teacher at Trey’s school who also couldn’t ingest gluten.

“This was back before I could Google ‘chocolate cake gluten free,’” she says. Her recipes were eventually a hit and she obtained a license to sell direct to customers or wholesale, and started The Gluten Free Baking Co. in 2015 out of her Coronado home. A majority of her clients have stuck with her during her five years in business, which sells cakes, bagels, cookies, muffins, dry mix, cupcakes and custom desserts. “It’s really sweet. They tell me, ‘I remember picking up goods from your front porch,’” she says with a laugh. She takes her customers’ input seriously, too. When she heard

the glaze on her lemon pound cake stuck to the wrapper, she revised it. Canete enjoys working with the celiac community. To help the community even further, Canete is scheduled to open a brickand-mortar store in North Park in February, its fifth birthday. She will reveal the address soon. “I have a 2,400-square-foot production kitchen in Clairemont, and I don’t have a retail front,” Canete says. “My customers are so diehard. They place an order two weeks in advance. We don’t do just one. If we have to do one cake, we have to plan it. Our customers have been begging us to have a retail site where they can buy a cake the day of their love one’s birthday.” Canete’s goods can be found in more than 20 cafes, coffee shops and restaurants throughout San Diego. She doesn’t have time for individual orders, so she deemed it best to open a brick-and-mortar shop. Canete recently appeared on Netflix’s “Sugar Rush,” with cake designer Lisa Altfest, a Carmel Valley native. They were the

only team who baked allergenfree sweets and, by focusing on their core principles of taste, texture and appearance, they placed second. “I have a strong intolerance to gluten and Lisa is a celiac,” she says. “I think that concept of feeling understood is huge. That’s what our clients expect. “I can’t tell you how many wedding consultations I’ve sat down to who have said the, ‘If I have one drop of milk in this cake, I will be sick on my wedding day.’ “With celiac disease, we’re a dedicated, gluten-free bakery. There’s no chance of cross-contamination. People really trust us with our health. We take that responsibility seriously.” Her goal is to open a glutenfree pastry school so she can share her message with burgeoning bakers. Her new location will have children’s classes—which she calls “labs”—that will teach cupcake or cookie decorating for children and

other offerings for adults. “There isn’t a school that exists,” Canete says. “I received a lot of letters after ‘Sugar Rush’ saying, ‘I’m a gluten-free pastry chef. Tell me how to mix flours.’ We don’t use a premix blend. “I have a little room in the bakery. Our ingredients room has 12 garbage can-sized bins of 12 different flours. Every recipe has a different mix of flours. We judge everything by taste, texture and appearance. Italy had the texture and appearance, but the taste was terrible. We found you have to mix your flour to get what you want. There needs to be an institution that teaches this.” Soon after her children were diagnosed with allergies, Canete learned just how flavorful her recipes were. “We eat gluten free in the house and my husband, over the years, became gluten free,” she says. “Making two meals every night for dinner was too much. He’s always been super supportive. “He absolutely loves Subway. They had a chocolate chip cookie, which was his favorite cookie. He left one on the counter that had one bite taken out of it. I asked him if the phone rang and he had to leave. He said, ‘No. Yours taste better. I’ve just gotten accustomed to your goodies and everything you make.’”