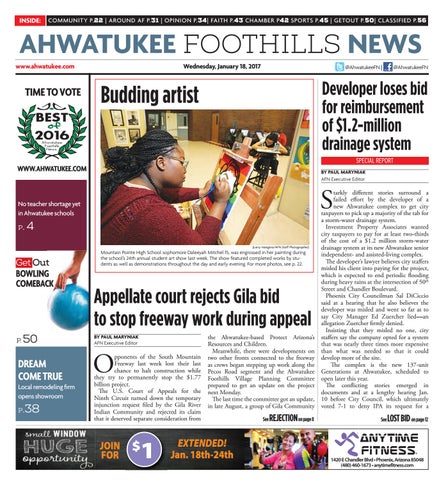 No teacher shortage yet in Ahwatukee schools

pponents of the South Mountain Freeway last week lost their last chance to halt construction while they try to permanently stop the $1.77 billion project. The U.S. Court of Appeals for the Ninth Circuit turned down the temporary injunction request filed by the Gila River Indian Community and rejected its claim that it deserved separate consideration from

the Ahwatukee-based Protect Arizona’s Resources and Children. Meanwhile, there were developments on two other fronts connected to the freeway as crews began stepping up work along the Pecos Road segment and the Ahwatukee Foothills Village Planning Committee prepared to get an update on the project next Monday. The last time the committee got an update, in late August, a group of Gila Community

tarkly different stories surround a failed effort by the developer of a new Ahwatukee complex to get city taxpayers to pick up a majority of the tab for a storm-water drainage system. Investment Property Associates wanted city taxpayers to pay for at least two-thirds of the cost of a $1.2 million storm-water drainage system at its new Ahwatukee senior independent- and assisted-living complex. The developer’s lawyer believes city staffers misled his client into paying for the project, which is expected to end periodic flooding during heavy rains at the intersection of 50th Street and Chandler Boulevard. Phoenix City Councilman Sal DiCiccio said at a hearing that he also believes the developer was misled and went so far as to say City Manager Ed Zuercher lied—an allegation Zuercher firmly denied. Insisting that they misled no one, city staffers say the company opted for a system that was nearly three times more expensive than what was needed so that it could develop more of the site. The complex is the new 137-unit Generations at Ahwatukee, scheduled to open later this year. The conflicting stories emerged in documents and at a lengthy hearing Jan. 10 before City Council, which ultimately voted 7-1 to deny IPA its request for a See