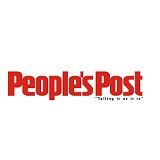 With these 10 editions, People's Post offers you blanket coverage of the Southern Suburbs by reaching into 318 495 households every Tuesday.

These are quality community newspapers with a specific focus on local news relevant to each area concerned. People's Post is published by WP Newspapers, who is responsible for the publication of all Media24's free community newspapers in the Cape Peninsula, including TygerBurger and City Vision.

With these four titles, 29 different editions and a total distribution of 784 813 newspapers per week, the group offer total coverage of the Cape Peninsula.