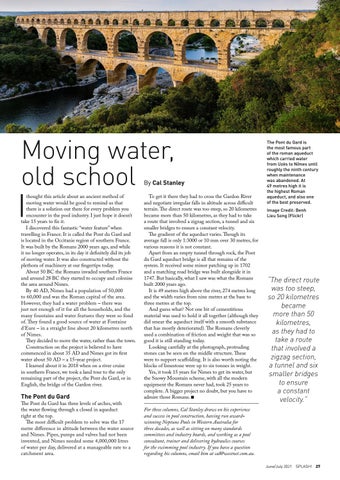 thought this article about an ancient method of moving water would be good to remind us that there is a solution out there for every problem you encounter in the pool industry. I just hope it doesn’t take 15 years to fix it. I discovered this fantastic “water feature” when travelling in France. It is called the Pont du Gard and is located in the Occitanie region of southern France. It was built by the Romans 2000 years ago, and while it no longer operates, in its day it definitely did its job of moving water. It was also constructed without the plethora of machinery at our fingertips today. About 50 BC the Romans invaded southern France and around 28 BC they started to occupy and colonise the area around Nimes. By 40 AD, Nimes had a population of 50,000 to 60,000 and was the Roman capital of the area. However, they had a water problem – there was just not enough of it for all the households, and the many fountains and water features they were so fond of. They found a good source of water at Fontaine d’Eure – in a straight line about 20 kilometres north of Nimes. They decided to move the water, rather than the town. Construction on the project is believed to have commenced in about 35 AD and Nimes got its first water about 50 AD – a 15-year project. I learned about it in 2018 when on a river cruise in southern France, we took a land tour to the only remaining part of the project, the Pont du Gard, or in English, the bridge of the Gardon river.

The Pont du Gard has three levels of arches, with the water flowing through a closed in aqueduct right at the top. The most difficult problem to solve was the 17 metre difference in altitude between the water source and Nimes. Pipes, pumps and valves had not been invented, and Nimes needed some 4,000,000 litres of water per day, delivered at a manageable rate to a catchment area.

By Cal Stanley To get it there they had to cross the Gardon River and negotiate irregular falls in altitude across difficult terrain. The direct route was too steep, so 20 kilometres became more than 50 kilometres, as they had to take a route that involved a zigzag section, a tunnel and six smaller bridges to ensure a constant velocity. The gradient of the aqueduct varies. Though its average fall is only 1:3000 or 10 mm over 30 metres, for various reasons it is not constant. Apart from an empty tunnel through rock, the Pont du Gard aqueduct bridge is all that remains of the system. It received some minor patching up in 1702 and a matching road bridge was built alongside it in 1747. But basically, what I saw was what the Romans built 2000 years ago. It is 49 metres high above the river, 274 metres long and the width varies from nine metres at the base to three metres at the top. And guess what? Not one bit of cementitious material was used to hold it all together (although they did smear the aqueduct itself with a smooth substance that has mostly deteriorated). The Romans cleverly used a combination of friction and weight that was so good it is still standing today. Looking carefully at the photograph, protruding stones can be seen on the middle structure. These were to support scaffolding. It is also worth noting the blocks of limestone were up to six tonnes in weight. Yes, it took 15 years for Nimes to get its water, but the Snowy Mountain scheme, with all the modern equipment the Romans never had, took 25 years to complete. A bigger project no doubt, but you have to admire those Romans. n

The Pont du Gard is the most famous part of the roman aqueduct which carried water from Uzès to Nîmes until roughly the ninth century when maintenance was abandoned. At 49 metres high it is the highest Roman aqueduct, and also one of the best preserved. Image Credit: Benh Lieu Song (Flickr)

“The direct route was too steep, so 20 kilometres became more than 50 kilometres, as they had to take a route that involved a zigzag section, a tunnel and six smaller bridges to ensure a constant velocity.”

For these columns, Cal Stanley draws on his experience and success in pool construction, having run awardwinning Neptune Pools in Western Australia for three decades, as well as sitting on many standards committees and industry boards, and working as a pool consultant, trainer and delivering hydraulics courses for the swimming pool industry. If you have a question regarding his columns, email him at cal@westnet.com.au. June/July 2021  SPLASH!  27