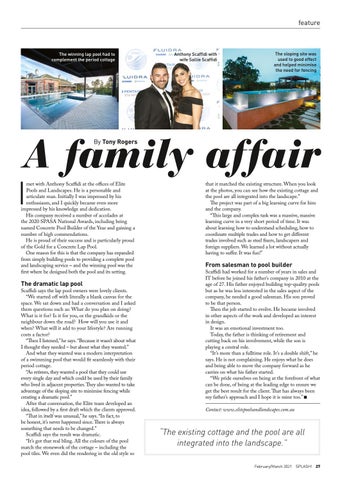 The winning lap pool had to complement the period cottage

A family affair By Tony Rogers

met with Anthony Scaffidi at the offices of Elite Pools and Landscapes. He is a personable and articulate man. Initially I was impressed by his enthusiasm, and I quickly became even more impressed by his knowledge and dedication. His company received a number of accolades at the 2020 SPASA National Awards, including being named Concrete Pool Builder of the Year and gaining a number of high commendations. He is proud of their success and is particularly proud of the Gold for a Concrete Lap Pool. One reason for this is that the company has expanded from simply building pools to providing a complete pool and landscaping service – and the winning pool was the first where he designed both the pool and its setting.

Scaffidi says the lap pool owners were lovely clients. “We started off with literally a blank canvas for the space. We sat down and had a conversation and I asked them questions such as: What do you plan on doing? What is it for? Is it for you, or the grandkids or the neighbour down the road? How will you use it and when? What will it add to your lifestyle? Are running costs a factor? “Then I listened,” he says. “Because it wasn’t about what I thought they needed – but about what they wanted.” And what they wanted was a modern interpretation of a swimming pool that would fit seamlessly with their period cottage. “As retirees, they wanted a pool that they could use every single day and which could be used by their family who lived in adjacent properties. They also wanted to take advantage of the sloping site to minimise fencing while creating a dramatic pool.” After that conversation, the Elite team developed an idea, followed by a first draft which the clients approved. “That in itself was unusual,” he says. “In fact, to be honest, it’s never happened since. There is always something that needs to be changed.” Scaffidi says the result was dramatic. “It’s got that real bling. All the colours of the pool match the stonework of the cottage – including the pool tiles. We even did the rendering in the old style so

that it matched the existing structure. When you look at the photos, you can see how the existing cottage and the pool are all integrated into the landscape.” The project was part of a big learning curve for him and the company. “This large and complex task was a massive, massive learning curve in a very short period of time. It was about learning how to understand scheduling, how to coordinate multiple trades and how to get different trades involved such as steel fixers, landscapers and foreign suppliers. We learned a lot without actually having to suffer. It was fun!”

From salesman to pool builder

Scaffidi had worked for a number of years in sales and IT before he joined his father’s company in 2010 at the age of 27. His father enjoyed building top-quality pools but as he was less interested in the sales aspect of the company, he needed a good salesman. His son proved to be that person. Then the job started to evolve. He became involved in other aspects of the work and developed an interest in design. It was an emotional investment too. Today, the father is thinking of retirement and cutting back on his involvement, while the son is playing a central role. “It’s more than a fulltime role. It’s a double shift,” he says. He is not complaining. He enjoys what he does and being able to move the company forward as he carries on what his father started. “We pride ourselves on being at the forefront of what can be done, of being at the leading edge to ensure we get the best result for the client. That has always been my father’s approach and I hope it is mine too.” n Contact: www.elitepoolsandlandscapes.com.au

“The existing cottage and the pool are all integrated into the landscape.” February/March 2021  SPLASH!  27