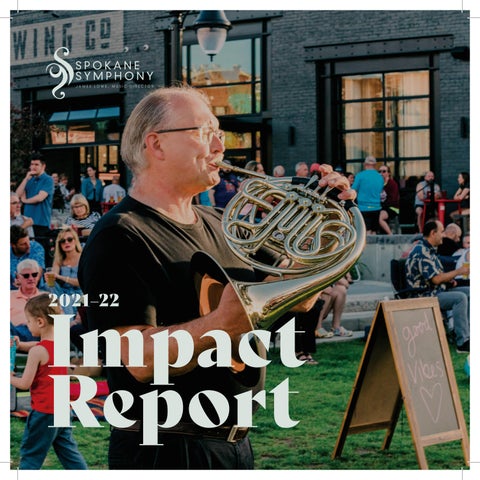 President’s Message Dear Friend of the Spokane Symphony and The Fox Theater: Reflecting upon the past season, it was truly a testament to the resiliency of the organization; and our community. Behavioral scientists postulate that it’s not the nature of the adversity that is most important, but how we deal with it. We as a community did what we do best: come together, collaborate, and support each other. We certainly felt the embrace of the community and did our best to reciprocate with an equally intense feeling through our music, performances, and community activities. At our annual meeting this summer I had the honor and privilege to be elected to a second term as President, a responsibility that I take very seriously. Thank you to all who have supported the Board of Trustees, the management team, musicians, volunteers, and collaborators as we succeeded this past season thanks to your continued support.

I shared the following thought as Board President: The 2022-2023 season is an expression of community, hope, optimism, and our desire as an organization is to be part of the healing and rebuilding process. We have faced the difficulties of the past two years, and together we are moving forward and turning the page, looking at the future with optimism. I look with excitement to the upcoming season, and the opportunity to once again share with all of you our support, and commitment to the Spokane Symphony and The Fox Theater, as well as our inarguable devotion to our community. Thank you again and hope to see you soon. Best regards: Dr. Frank Velázquez President, Spokane Symphony, and Fox Theater Board of Trustees

Fox of the Future Your generous support has a continuous impact on The Fox Theater operations throughout the year. Annual fund donations offset operating expenses like electricity, heat, maintenance, and supplies that are significant for a building the size of The Fox Theater. In addition to the Annual Fund, major donors have generously funded quite a few Capital Expenditures this past year. Thank you to Washington Trust Bank who made a generous commitment by investing in a cloud-based operating system known as VenueOps. The addition of this significant design platform allows for maximum impact at all administrative levels for The Fox and the Symphony. The integration of event management, execution of workflow, forecasting, and business analytics delivers maximum impact for The Fox staff and propels them into 21st century technology.

The Harriet Cheney Cowles Foundation graciously invested in an all-new website, branding project and an updated projector. The new website will enhance integration and cross promotion of The Fox and the Symphony together, allowing us to market digitally, retarget, and capture additional revenue. Along with a new website, a new branding reveal will reinvigorate The Fox and the Symphony with a bold new look and feel. The purchase of a new high lumen projector will allow us to increase our rental income from users of the venue, as well as enhance productions, all while saving money on production expenses. After 15 years, thousands of performances, and a flood, we were able to repair and refinish the stage floor thanks to our donors. We can’t wait for you to see it! Brian Ritter General Manager

Capital Expenditures This fiscal year we received over $140,000 towards special projects that improved the organization’s internal operating efficiencies, decreased costs, maximized revenues, and the community’s experience within the hall.

Thank You to Our Sponsors: Leonard and Helen Byrne Sandra and Steve Kernerman

“For me, SSA membership is an opportunity to be productive, to keep moving forward in life, and to learn how to do things better and better. Most of all, it is being in the company of really competent, dedicated, welcoming, appreciative, and marvelous Symphony volunteers who deserve the praise and recognition for their achievements that they receive at the national level.” Janet Lambarth SSA President

Annual Fund The goal to rebuild lost revenue in the 2021-2022 season was ambitious with both an ever-changing economic environment, and health and safety protocols for both performers and audience alike. Each performance was an experiment in adaptation. This season, we took the first steps towards productive and needed changes, and finished projects that were paused by COVID-19. Development successfully raised nearly $1.4mm for the Annul Fund, and secured much needed additional funding of $140,000 toward Capital Expenditure projects benefitting the bottom lines of both the Symphony and The Fox. With more emphasis placed on legacy planning conversations, we saw Qualified Charitable Distributions from individuals IRA’s jump ninety percent year over year as a new funding source. As we reflect on the 2021-22 fiscal year, it was tenacity by a dynamic executive team,

energetic staff and generosity of donors that saw the Symphony and the Fox come out of a tumultuous two years of Covid.

It was because of You. Through your generous support, none of our work this year — or any other year — would be possible. We are grateful for you being by our side throughout the process, and we look forward to continuing this momentum together. Jan &amp; Jeanne Ager, and Becca Marsh

Legacy Plays On Bob and I have been looking for ways to manage our assets sustainably as we age, not only to feel secure, but also to be able to leave a legacy for our heirs, and to provide continued support to our favorite non-profits.

We also wanted to find a way to bequeath our assets without putting a tax burden on our children. By including the Spokane Symphony in our legacy planning we can leave cash,

stock, real estate, personal property and insurance policies. For instance, if our estate includes property that is of no use to our heirs, the Symphony may be designated as the beneficiary, thus avoiding a large tax burden on our heirs when that property is sold. Making these changes to our estate plan has given us peace of mind, and also provided the opportunity to talk to our children about our plans for our estate after we pass. We also wanted to show them how to give back to a community that has been so good to us. Attending Symphony concerts over the last 40 years has given Bob and me incalculable joy. Having the Spokane Symphony as part of our Estate Planning is a way we can give something of value in return long after we’re gone. After hearing of our plans, one of our sons offered this: “When both of you are dead and gone, the SSO will still play on!” Ann Fennessy

The support from our donors, trustees, government grants, and community has allowed

the orchestra to rebuild

be a beacon of musical joy

operations and continue to for Spokane and the region. We look forward to a successful 2022-23 season. Dr. Vange Hochheimer Treasurer

Message from James Lowe Coming out of the lockdown period has been a challenge for everyone, not least performing arts organizations. Ongoing uncertainty in terms of everyday safety protocol for performers and audience, alongside the immediate post-covid staffing and last-minute changes in personnel have made this season no easier than the pandemic years. It has not been simply a case of turning the faucet back on! It’s against this backdrop that once again we have shown ourselves to be an organization that can not only survive, but thrive even against the odds. I’m extraordinarily proud of the musicians and staff all of whom have shown immense dedication and resourcefulness to deliver a season that was energetic, inspiring and of an incredible artistic quality. Looking to the upcoming season, we have an ambitious program of wide-ranging wonderful music, and some outstanding community and education work. The three 12

living Music Directors of the Spokane Symphony will all conduct the orchestra as well as Leonard Slatkin, one of America’s foremost and celebrated conductors. We welcome world-class soloists both familiar and new and bring a stellar range of pops concerts sure to entertain and dazzle. Our commitment to the community will continue as we bring the benefits of music to yet more corners of our city. We look forward to some stellar nonsymphony acts under The Fox Presents banner, and continue to work to make The Fox Theater a place for everyone. More than anything I want to thank you, the community of Spokane, who continue to love and support our work. An orchestra is nothing without an audience and we can’t wait to delight, entertain, move and connect with you over the forthcoming season. James Lowe, Music Director S P OKANE SY MP HONY

The Board of Trustees currently has 18 members, 16 of whom are voting.

Education This past season featured a return of our favorite activities such as Symphony Day and Link Up, as well as some bold steps into new territory with alternative creative genres and a community art project. We are grateful to our community partners including the incredible educators in Spokane who allow us to engage with their students in a meaningful way. James Lowe conducted Symphony Day in March, previously known as the 4th and 5th grade concerts. James guided the students through music programmed to inspire vivid imagery for their imagination. This included excerpts from “Enigma Variations,” Firebird, and Danse Negre. Over 3,000 students from Spokane and Northern Idaho were able to take part in these concerts. Having young people in The Fox for the first time in two years was exceptionally rewarding.

In May, we put on Carnegie Hall’s interactive concert program Link Up: The Orchestra ROCKS! Each year, Carnegie Hall provides curriculum for teachers and students to learn several pieces to sing or play recorder along with the orchestra. While the pandemic created uncertainty around music-making in the hall, we were thrilled to be able to present this program and have over 500 young people play along with the orchestra. Our Master Class series featured guest artist visits to universities, as well as performances at The Fox. In addition, our Holiday Pops guest artist, Cami Bradley, led a Songwriting Workshop with her songwriting partner, Benn Suede. We are honored to extend our reach into contemporary genres while continuing to offer educational activities with our Masterworks guest artists.

We believe the transformational experiences the Symphony creates for individuals and families fuel our thriving community by building connection and belonging. This year we brought a quintet to schools to kick off our Outreach Tours, reaching 400 students in their first assembly since the onset of the pandemic. These tours culminated in a Free Family Concert sponsored by the Hagan Foundation, where 1,200 families and friends enjoyed lobby activities and beautiful music in our hall.

For students under 18, we offer free tickets to every Masterworks. For students over 18 and with proof of college ID, a College Card is available for $40. This grants entry to all Masterworks concerts throughout the season, and $20 companion tickets to bring a friend. For individuals with a current Spokane County Library District card, four free tickets per season are available through their website at scld.org/museum-cultural-passes.

Our ability to provide students from every background with the opportunities to work with professionals is only possible with the support of sponsors such as:

Estate of *Margaret A. Hinnenkamp

Camille Zamora and the Mambo Kings with the Spokane Symphony

In Memory of Sandra Thompson-Irwin and Hampton Irwin

SAH Fund for the Arts

Gary and Diane Buckley in memory of Elizabeth “Liz” Burroughs

J. A. and Marie Wyatt

We like to recognize all of our wonderful donors. Please call us at 509-464-7069 if there is a problem with your recognition name or level.