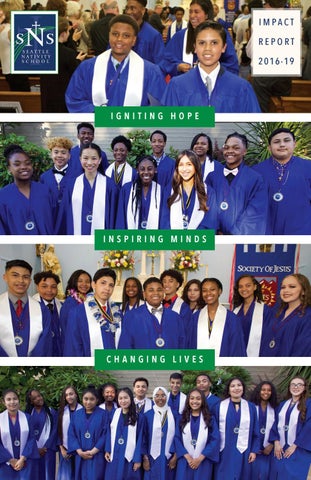 to break the cycle of poverty through an education that nourishes souls and ignites leaders for love and service.

FROM THE BOARD OF DIRECTORS’ CHAIRPERSON

Michael Mott Each year, since the founding of Seattle Nativity School, I receive a letter from a Nativity student. I have six of these now. The letter includes an update on what they are studying and how they are doing in school. It often talks about what they aspire to be when they grow up. It always includes words of gratitude. For each student that sends me a letter, I start their new school year by sending them a response. I ask questions like, “How are you doing in high school?” “Do you still want to be a pediatrician?” “Does your love of music continue?” This year, I sent a letter to a senior in high school who first wrote to me when, as an eighth grader, he was “mentoring sixth graders and excited to go to high school.” In my letter, I asked him to remain part of the Nativity Family; to come back and inspire students; to be a “man for others.” That is a request I have every confidence will be honored.

Our doors have been open for six years now. This means our very first Nativity class will be graduating high school and heading off to college. This is an exciting milestone in their Nativity journey and our care for them does not stop with graduation for we are committed, as part of the Nativity model and our new Strategic Plan, to continue our support “to Graduation and Beyond!” We could not get to this exciting moment without the partnership and support of our generous benefactors who contribute their time, talent and financial resources. Together, we can all accompany our Nativity students and graduates as they (and all of us) move, in the words of a former friend and founding board member, onward and upward! Thank you. 1

INSPIRE MINDS What does Science, Technology, Engineering, and Mathematics (STEM) education look like at Seattle Nativity School? The goal of our STEM program is to create connections across subjects, present a relevant common context, and increase retention. As students build knowledge, they are able to collaborate and solve complex problems.

Our Water Unit is an excellent example of engaging students with three essential questions across all subjects. How have humans interacted with water throughout history?

Why is water essential to the natural world?

What are our responsibilities regarding water?

Science The importance of water is highlighted by the ways it impacts climate and is necessary for living organisms. This importance increases focus on how we use and manage our water supply, which is part of the global water cycle.

Social Studies &amp; Religion Researching the impact of water and resources on civilization introduces the role humans have as stewards of creation. The study of ancient engineering inventions provides the foundation for solutions for our current environmental needs. Language Arts | ELA Reading the fiction novel FLUSH presents an opportunity to make thematic connections to relevant environmental concerns. The non-fiction book WORLD WITHOUT FISH introduces the importance of a balanced ecosystem. 1-MINUTE HAND-WASH

CHANGE LIVES This chart represents the number of students impacted by a Nativity education. From 2013-2019, your investment has allowed Nativity to grow 453%. In 2020, our inaugural graduating class will graduate from high school. In 2024, the same inaugural class will complete college and begin entering the workforce. The Nativity 14 model spans an 11+ year period, assisting low-income students as they break the cycle of poverty.

Opened doors to one class of 6th grade students.

Impact of Education on Income

24% of 8th grade students in public schools studied Algebra 1 in the United States.*

While in the 7th grade, Seattle Nativity School Class of 2020 demonstrated 204% growth in one year on the nationally-normed MAP* Test.

Graduation &amp; Beyond is our graduate support program designed to provide continuous support, advice, coaching, and mentoring through high school and college years and into career placement. In the 2018-19 school year, our team grew and we added a full-time Graduate Support Director. With 36 students in 15 high schools and 14 eighth grade students applying to college-preparatory high schools, Graduation &amp; Beyond became a vital aspect of our program.

Completing the College Bound Scholarship Washington application is part of our program for all students to have future access to college.

SUPPORT As part of our mission, Seattle Nativity School is a tuition-free program serving low-income students for 11 years of their academic journey through college graduation and into their careers. We are grateful for the support of generous individuals, foundations, and corporations, who provide 100% support of operational expenses. JULY 1, 2016—JUNE 30, 2019

Seattle Nativity School is a tuition-free middle school with graduate support through high school and college years. This report provides a small window into the impact the greater community can change the lives of low-income students through a college preparatory program. Graduation & Beyond!