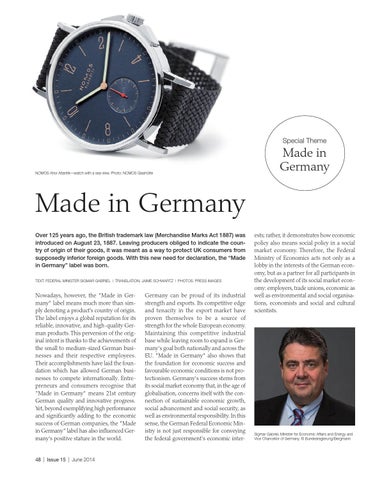 Made in Germany Over 125 years ago, the British trademark law (Merchandise Marks Act 1887) was introduced on August 23, 1887. Leaving producers obliged to indicate the country of origin of their goods, it was meant as a way to protect UK consumers from supposedly inferior foreign goods. With this new need for declaration, the “Made in Germany” label was born. TEXT: FEDERAL MINISTER SIGMAR GABRIEL | TRANSLATION: JAIME SCHWARTZ | PHOTOS: PRESS IMAGES

Nowadays, however, the &quot;Made in Germany&quot; label means much more than simply denoting a product’s country of origin. The label enjoys a global reputation for its reliable, innovative, and high-quality German products. This perversion of the original intent is thanks to the achievements of the small to medium-sized German businesses and their respective employees. Their accomplishments have laid the foundation which has allowed German businesses to compete internationally. Entrepreneurs and consumers recognise that &quot;Made in Germany&quot; means 21st century German quality and innovative progress. Yet, beyond exemplifying high performance and significantly adding to the economic success of German companies, the &quot;Made in Germany&quot; label has also influenced Germany&#39;s positive stature in the world.

Germany can be proud of its industrial strength and exports. Its competitive edge and tenacity in the export market have proven themselves to be a source of strength for the whole European economy. Maintaining this competitive industrial base while leaving room to expand is Germany&#39;s goal both nationally and across the EU. &quot;Made in Germany&quot; also shows that the foundation for economic success and favourable economic conditions is not protectionism. Germany&#39;s success stems from its social market economy that, in the age of globalisation, concerns itself with the connection of sustainable economic growth, social advancement and social security, as well as environmental responsibility. In this sense, the German Federal Economic Ministry is not just responsible for conveying the federal government&#39;s economic inter-

ests; rather, it demonstrates how economic policy also means social policy in a social market economy. Therefore, the Federal Ministry of Economics acts not only as a lobby in the interests of the German economy, but as a partner for all participants in the development of its social market economy: employers, trade unions, economic as well as environmental and social organisations, economists and social and cultural scientists.