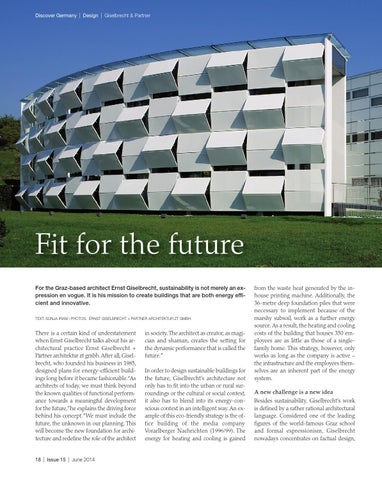 Fit for the future For the Graz-based architect Ernst Giselbrecht, sustainability is not merely an expression en vogue. It is his mission to create buildings that are both energy efficient and innovative. TEXT: SONJA IRANI | PHOTOS: ERNST GISELBRECHT + PARTNER ARCHITEKTUR ZT GMBH

There is a certain kind of understatement when Ernst Giselbrecht talks about his architectural practice Ernst Giselbrecht + Partner architektur zt gmbh. After all, Giselbrecht, who founded his business in 1985, designed plans for energy-efficient buildings long before it became fashionable.“As architects of today, we must think beyond the known qualities of functional performance towards a meaningful development for the future,”he explains the driving force behind his concept.“We must include the future, the unknown in our planning. This will become the new foundation for architecture and redefine the role of the architect

in society.The architect as creator, as magician and shaman, creates the setting for the dynamic performance that is called the future.” In order to design sustainable buildings for the future, Giselbrecht’s architecture not only has to fit into the urban or rural surroundings or the cultural or social context, it also has to blend into its energy-conscious context in an intelligent way. An example of this eco-friendly strategy is the office building of the media company Vorarlberger Nachrichten (1996/99). The energy for heating and cooling is gained

from the waste heat generated by the inhouse printing machine. Additionally, the 36-metre deep foundation piles that were necessary to implement because of the marshy subsoil, work as a further energy source. As a result, the heating and cooling costs of the building that houses 350 employees are as little as those of a singlefamily home. This strategy, however, only works as long as the company is active – the infrastructure and the employees themselves are an inherent part of the energy system. A new challenge is a new idea Besides sustainability, Giselbrecht’s work is defined by a rather rational architectural language. Considered one of the leading figures of the world-famous Graz school and formal expressionism, Giselbrecht nowadays concentrates on factual design,