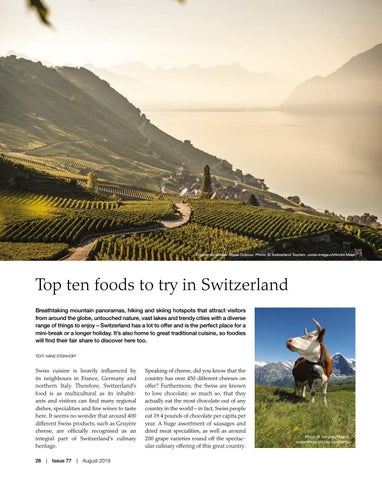 Top ten foods to try in Switzerland Breathtaking mountain panoramas, hiking and skiing hotspots that attract visitors from around the globe, untouched nature, vast lakes and trendy cities with a diverse range of things to enjoy – Switzerland has a lot to offer and is the perfect place for a mini-break or a longer holiday. It’s also home to great traditional cuisine, so foodies will find their fair share to discover here too. TEXT: NANE STEINHOFF

Swiss cuisine is heavily influenced by its neighbours in France, Germany and northern Italy. Therefore, Switzerland’s food is as multicultural as its inhabitants and visitors can find many regional dishes, specialities and fine wines to taste here. It seems no wonder that around 400 different Swiss products, such as Gruyère cheese, are officially recognised as an integral part of Switzerland’s culinary heritage. 26  |  Issue 77  |  August 2019

Speaking of cheese, did you know that the country has over 450 different cheeses on offer? Furthermore, the Swiss are known to love chocolate: so much so, that they actually eat the most chocolate out of any country in the world – in fact, Swiss people eat 19.4 pounds of chocolate per capita per year. A huge assortment of sausages and dried meat specialities, as well as around 200 grape varieties round off the spectacular culinary offering of this great country.