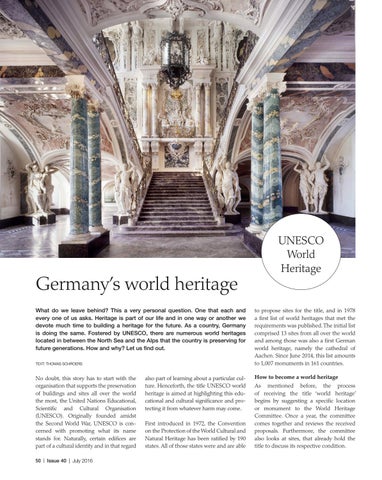 Germanyâ&amp;#x20AC;&amp;#x2122;s world heritage What do we leave behind? This a very personal question. One that each and every one of us asks. Heritage is part of our life and in one way or another we devote much time to building a heritage for the future. As a country, Germany is doing the same. Fostered by UNESCO, there are numerous world heritages located in between the North Sea and the Alps that the country is preserving for future generations. How and why? Let us find out. TEXT: THOMAS SCHROERS

No doubt, this story has to start with the organisation that supports the preservation of buildings and sites all over the world the most, the United Nations Educational, Scientific and Cultural Organisation (UNESCO). Originally founded amidst the Second World War, UNESCO is concerned with promoting what its name stands for. Naturally, certain edifices are part of a cultural identity and in that regard 50 | Issue 40 | July 2016

also part of learning about a particular culture. Henceforth, the title UNESCO world heritage is aimed at highlighting this educational and cultural significance and protecting it from whatever harm may come. First introduced in 1972, the Convention on the Protection of the World Cultural and Natural Heritage has been ratified by 190 states. All of those states were and are able

to propose sites for the title, and in 1978 a first list of world heritages that met the requirements was published. The initial list comprised 13 sites from all over the world and among those was also a first German world heritage, namely the cathedral of Aachen. Since June 2014, this list amounts to 1,007 monuments in 161 countries. How to become a world heritage As mentioned before, the process of receiving the title â&amp;#x20AC;&amp;#x2DC;world heritageâ&amp;#x20AC;&amp;#x2122; begins by suggesting a specific location or monument to the World Heritage Committee. Once a year, the committee comes together and reviews the received proposals. Furthermore, the committee also looks at sites, that already hold the title to discuss its respective condition.