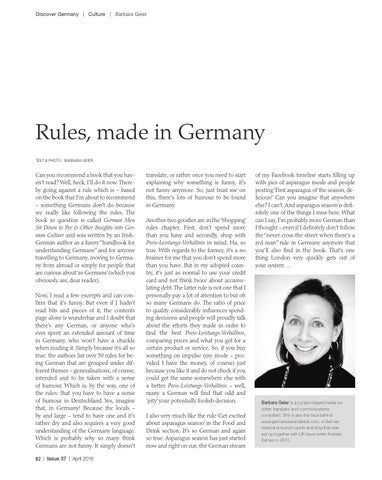 Can you recommend a book that you haven’t read? Well, heck, I’ll do it now. Thereby going against a rule which is – based on the book that I’m about to recommend – something Germans don’t do because we really like following the rules. The book in question is called German Men Sit Down to Pee &amp; Other Insights into German Culture and was written by an IrishGerman author as a funny “handbook for understanding Germans” and for anyone travelling to Germany, moving to Germany from abroad or simply for people that are curious about ‘ze Germans’ (which you obviously are, dear reader). Now, I read a few excerpts and can confirm that it’s funny. But even if I hadn’t read bits and pieces of it, the contents page alone is wunderbar and I doubt that there’s any German, or anyone who’s ever spent an extended amount of time in Germany, who won’t have a chuckle when reading it. Simply because it’s all so true: the authors list over 50 rules for being German that are grouped under different themes – generalisations, of course, intended and to be taken with a sense of humour. Which is, by the way, one of the rules: that you have to have a sense of humour in Deutschland. Yes, imagine that, in Germany! Because the locals – by and large – tend to have one and it’s rather dry and also requires a very good understanding of the Germany language. Which is probably why so many think Germans are not funny. It simply doesn’t 82 | Issue 37 | April 2016

translate, or rather once you need to start explaining why something is funny, it’s not funny anymore. So, just trust me on this, there’s lots of humour to be found in Germany. Another two goodies are in the ‘Shopping’ rules chapter. First, don’t spend more than you have and secondly, shop with Preis-Leistungs-Verhältnis in mind. Ha, so true. With regards to the former, it’s a no brainer for me that you don’t spend more than you have. But in my adopted country, it’s just as normal to use your credit card and not think twice about accumulating debt. The latter rule is not one that I personally pay a lot of attention to but oh so many Germans do. The ratio of price to quality considerably influences spending decisions and people will proudly talk about the efforts they made in order to find the best Preis-Leistungs-Verhältnis, comparing prices and what you get for a certain product or service. So, if you buy something on impulse (my mode – provided I have the money, of course) just because you like it and do not check if you could get the same somewhere else with a better Preis-Leistungs-Verhältnis – well, many a German will find that odd and ’pity’ your potentially foolish decision. I also very much like the rule ‘Get excited about asparagus season’ in the Food and Drink section. It’s so German and again so true. Asparagus season has just started now and right on cue, the German stream

of my Facebook timeline starts filling up with pics of asparagus meals and people posting ‘First asparagus of the season, delicious!’ Can you imagine that anywhere else? I can’t. And asparagus season is definitely one of the things I miss here. What can I say, I’m probably more German than I thought – even if I definitely don’t follow the “never cross the street when there’s a red man” rule in Germany anymore that you’ll also find in the book. That’s one thing London very quickly gets out of your system …