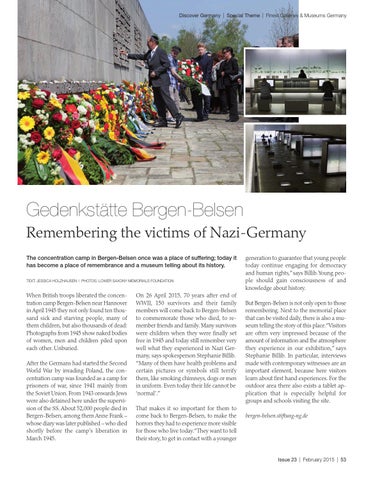 Gedenkstätte Bergen-Belsen Remembering the victims of Nazi-Germany The concentration camp in Bergen-Belsen once was a place of suffering; today it has become a place of remembrance and a museum telling about its history. TEXT: JESSICA HOLZHAUSEN | PHOTOS: LOWER SAXONY MEMORIALS FOUNDATION

When British troops liberated the concentration camp Bergen-Belsen near Hannover in April 1945 they not only found ten thousand sick and starving people, many of them children, but also thousands of dead: Photographs from 1945 show naked bodies of women, men and children piled upon each other. Unburied. After the Germans had started the Second World War by invading Poland, the concentration camp was founded as a camp for prisoners of war, since 1941 mainly from the Soviet Union. From 1943 onwards Jews were also detained here under the supervision of the SS. About 52,000 people died in Bergen-Belsen, among them Anne Frank – whose diary was later published – who died shortly before the camp’s liberation in March 1945.

On 26 April 2015, 70 years after end of WWII, 150 survivors and their family members will come back to Bergen-Belsen to commemorate those who died, to remember friends and family. Many survivors were children when they were finally set free in 1945 and today still remember very well what they experienced in Nazi Germany, says spokesperson Stephanie Billib. “Many of them have health problems and certain pictures or symbols still terrify them, like smoking chimneys, dogs or men in uniform. Even today their life cannot be ‘normal’.” That makes it so important for them to come back to Bergen-Belsen, to make the horrors they had to experience more visible for those who live today.“They want to tell their story, to get in contact with a younger

generation to guarantee that young people today continue engaging for democracy and human rights,”says Billib.Young people should gain consciousness of and knowledge about history. But Bergen-Belsen is not only open to those remembering. Next to the memorial place that can be visited daily, there is also a museum telling the story of this place.“Visitors are often very impressed because of the amount of information and the atmosphere they experience in our exhibition,” says Stephanie Billib. In particular, interviews made with contemporary witnesses are an important element, because here visitors learn about first hand experiences. For the outdoor area there also exists a tablet application that is especially helpful for groups and schools visiting the site. bergen-belsen.stiftung-ng.de