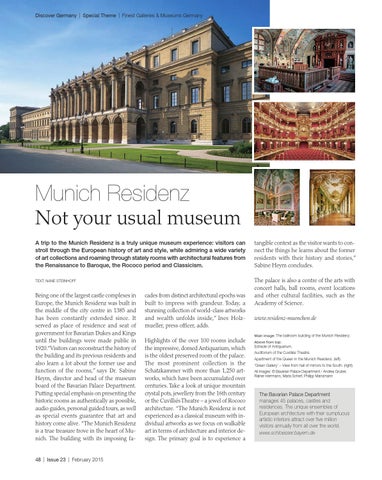 Munich Residenz Not your usual museum A trip to the Munich Residenz is a truly unique museum experience: visitors can stroll through the European history of art and style, while admiring a wide variety of art collections and roaming through stately rooms with architectural features from the Renaissance to Baroque, the Rococo period and Classicism.

tangible context as the visitor wants to connect the things he learns about the former residents with their history and stories,” Sabine Heym concludes.

The palace is also a centre of the arts with concert halls, ball rooms, event locations and other cultural facilities, such as the Academy of Science.

Being one of the largest castle complexes in Europe, the Munich Residenz was built in the middle of the city centre in 1385 and has been constantly extended since. It served as place of residence and seat of government for Bavarian Dukes and Kings until the buildings were made public in 1920.“Visitors can reconstruct the history of the building and its previous residents and also learn a lot about the former use and function of the rooms,” says Dr. Sabine Heym, director and head of the museum board of the Bavarian Palace Department. Putting special emphasis on presenting the historic rooms as authentically as possible, audio guides, personal guided tours, as well as special events guarantee that art and history come alive. “The Munich Residenz is a true treasure trove in the heart of Munich. The building with its imposing fa-

www.residenz-muenchen.de Main image: The ballroom building of the Munich Residenz.

Highlights of the over 100 rooms include the impressive, domed Antiquarium, which is the oldest preserved room of the palace. The most prominent collection is the Schatzkammer with more than 1,250 artworks, which have been accumulated over centuries. Take a look at unique mountain crystal pots, jewellery from the 16th century or the Cuvilliés Theatre – a jewel of Rococo architecture. “The Munich Residenz is not experienced as a classical museum with individual artworks as we focus on walkable art in terms of architecture and interior design. The primary goal is to experience a

Above from top: Estrade of Antiquarium. Auditorium of the Cuvilliés Theatre. Apartment of the Queen in the Munich Residenz. (left) ‘Green Gallery’ – View from hall of mirrors to the South. (right) All images: © Bavarian Palace Department / Andrea Gruber, Rainer Herrmann, Maria Scherf, Philipp Mansmann

The Bavarian Palace Department manages 45 palaces, castles and residences. The unique ensembles of European architecture with their sumptuous artistic interiors attract over five million visitors annually from all over the world. www.schloesser.bayern.de