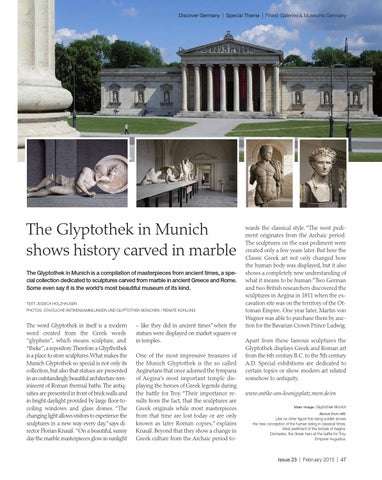 The Glyptothek in Munich shows history carved in marble The Glyptothek in Munich is a compilation of masterpieces from ancient times, a special collection dedicated to sculptures carved from marble in ancient Greece and Rome. Some even say it is the world’s most beautiful museum of its kind. TEXT: JESSICA HOLZHAUSEN PHOTOS: STAATLICHE ANTIKENSAMMLUNGEN UND GLYPTOTHEK MÜNCHEN / RENATE KÜHLUNG

The word Glyptothek in itself is a modern word created from the Greek words “glyphein”, which means sculpture, and “theke”, a repository.Therefore a Glypthothek is a place to store sculptures.What makes the Munich Glyptothek so special is not only its collection, but also that statues are presented in an outstandingly beautiful architecture reminiscent of Roman thermal baths. The antiquities are presented in front of brick walls and in bright daylight provided by large floor-toceiling windows and glass domes. “The changing light allows visitors to experience the sculptures in a new way every day,”says director Florian Knauß. “On a beautiful, sunny day the marble masterpieces glow in sunlight

– like they did in ancient times” when the statues were displayed on market squares or in temples. One of the most impressive treasures of the Munich Glyptothek is the so called Aeginetans that once adorned the tympana of Aegina’s most important temple displaying the heroes of Greek legends during the battle for Troy. “Their importance results from the fact, that the sculptures are Greek originals while most masterpieces from that time are lost today or are only known as later Roman copies,” explains Knauß. Beyond that they show a change in Greek culture from the Archaic period to-

wards the classical style. “The west pediment originates from the Archaic period. The sculptures on the east pediment were created only a few years later. But here the Classic Greek art not only changed how the human body was displayed, but it also shows a completely new understanding of what it means to be human.”Two German and two British researchers discovered the sculptures in Aegina in 1811 when the excavation site was on the territory of the Ottoman Empire. One year later, Martin von Wagner was able to purchase them by auction for the Bavarian Crown Prince Ludwig. Apart from these famous sculptures the Glyptothek displays Greek and Roman art from the 6th century B.C. to the 5th century A.D. Special exhibitions are dedicated to certain topics or show modern art related somehow to antiquity. www.antike-am-koenigsplatz.mwn.de/en Main image: Glyptothek Munich Above from left: Like no other figure this dying soldier shows the new conception of the human being in classical times. West pediment of the temple of Aegina. Diomedes, the Greek hero at the battle for Troy. Emporer Augustus.