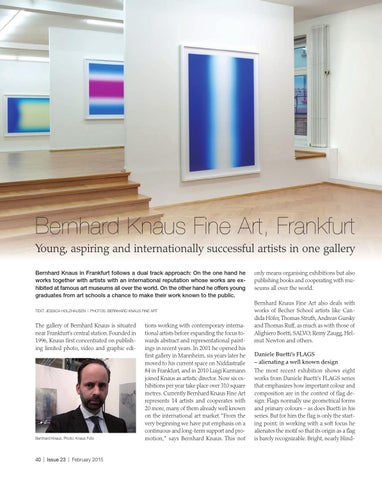 Bernhard Knaus Fine Art, Frankfurt Young, aspiring and internationally successful artists in one gallery Bernhard Knaus in Frankfurt follows a dual track approach: On the one hand he works together with artists with an international reputation whose works are exhibited at famous art museums all over the world. On the other hand he offers young graduates from art schools a chance to make their work known to the public. TEXT: JESSICA HOLZHAUSEN | PHOTOS: BERNHARD KNAUS FINE ART

tions working with contemporary international artists before expanding the focus towards abstract and representational paintings in recent years. In 2001 he opened his first gallery in Mannheim, six years later he moved to his current space on Niddastraße 84 in Frankfurt, and in 2010 Luigi Kurmann joined Knaus as artistic director. Now six exhibitions per year take place over 310 square metres. Currently Bernhard Knaus Fine Art represents 14 artists and cooperates with 20 more, many of them already well known on the international art market.“From the very beginning we have put emphasis on a continuous and long-term support and promotion,” says Bernhard Knaus. This not

only means organising exhibitions but also publishing books and cooperating with museums all over the world. Bernhard Knaus Fine Art also deals with works of Becher School artists like Candida Höfer,Thomas Struth, Andreas Gursky and Thomas Ruff, as much as with those of Alighiero Boetti, SALVO, Remy Zaugg, Helmut Newton and others. Daniele Buetti’s FLAGS – alienating a well known design The most recent exhibition shows eight works from Daniele Buetti’s FLAGS series that emphasizes how important colour and composition are in the context of flag design: Flags normally use geometrical forms and primary colours – as does Buetti in his series. But for him the flag is only the starting point; in working with a soft focus he alienates the motif so that its origin as a flag is barely recognizable. Bright, nearly blind-