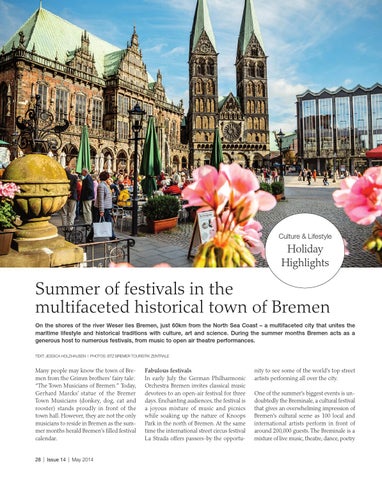 Summer of festivals in the multifaceted historical town of Bremen On the shores of the river Weser lies Bremen, just 60km from the North Sea Coast – a multifaceted city that unites the maritime lifestyle and historical traditions with culture, art and science. During the summer months Bremen acts as a generous host to numerous festivals, from music to open air theatre performances. TEXT: JESSICA HOLZHAUSEN | PHOTOS: BTZ BREMER TOURISTIK ZENTRALE

Many people may know the town of Bremen from the Grimm brothers' fairy tale: “The Town Musicians of Bremen.” Today, Gerhard Marcks’ statue of the Bremer Town Musicians (donkey, dog, cat and rooster) stands proudly in front of the town hall. However, they are not the only musicians to reside in Bremen as the summer months herald Bremen’s filled festival calendar.

Fabulous festivals In early July the German Philharmonic Orchestra Bremen invites classical music devotees to an open-air festival for three days. Enchanting audiences, the festival is a joyous mixture of music and picnics while soaking up the nature of Knoops Park in the north of Bremen. At the same time the international street circus festival La Strada offers passers-by the opportu-

nity to see some of the world’s top street artists performing all over the city. One of the summer’s biggest events is undoubtedly the Breminale, a cultural festival that gives an overwhelming impression of Bremen’s cultural scene as 100 local and international artists perform in front of around 200,000 guests. The Breminale is a mixture of live music, theatre, dance, poetry