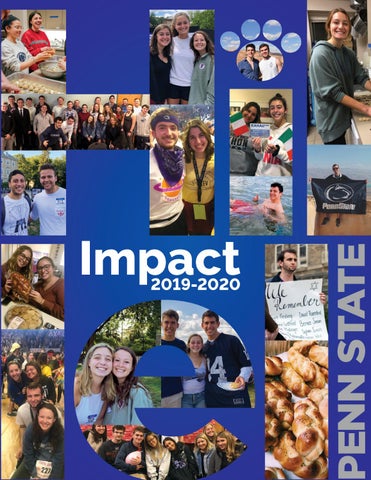 Our Vision We envision a world where every student is inspired to make an enduring commitment to Jewish life, learning and Israel.

Year after year, I’m so impressed by the students I encounter through Penn State Hillel. They find innovative and interesting ways to express their Jewish identity, like Challah For Hunger where students met bi-weekly to bake and sell challah loaves benefiting the local food bank, and are just so thoughtful about their role in the greater Penn State community. Although the Hillel experience today compared to my time at Penn State is night and day, it’s really Penn State Hillel’s ‘raw material’ that is provided by you, our generous alumni, parents and friends, that helps shape and be shaped by student leaders every day. A year turned upside down has revealed the strength of our students and I am proud to continue to lead alongside these spectacular Jewish leaders, innovators and passionate advocates. Jill Epstein ’88 P’22 Chair, Penn State Hillel Board of Directors

Hillel means something different to every student – it can be a place to meet friends, to grow spiritually, to gain skills, to become a leader, or to simply unwind at Shabbat dinners. For me, Hillel has been all of this and more over the past three years. The space it provides for Jewish students to explore their identity within a supportive community is unparalleled on our campus, and something every student can benefit from. Having gained so much from Penn State Hillel, it has been a true honor to watch our organization grow and flourish in my past two years on the executive board. I am so excited to share our past year with you, and to show you a glimpse of thriving Jewish life on our campus.

Hope. While not specifically in Penn State Hillel’s mission statement, bringing hope to others is such a critical part of what we do. In the days and weeks following the outbreak of COVID-19 in the United States, our team worked harder than ever, focusing on personal outreach to check in with students and supporters. We reached out to every single student we know, thousands of them, and to hundreds of alumni as well. As students became ready for virtual programming, we shifted our learning classes online and brought Shabbat, Israel speakers and other opportunities into their homes. Recognizing that our graduating seniors would not have the special end to their collegiate experience they had expected, we put together tributes, videos honoring them and virtual events where they could share their memories and feelings. Finishing the academic year with so much uncertainty, what our students needed is not so surprising—a good joke, a friendly ear, a virtual shoulder to cry on. More than ever, they crave community, connection. Looking forward, we don’t know what the future will bring. And there are so many people for us to connect with, so much we can do to support our students’ emerging Jewish identities. Our job at Penn State Hillel is to build the future of the Jewish community—to turn hope for a bright future into reality—and we do that one person at a time, one relationship at a time. As Rabbi Tarfon says in Pirkei Avot, it’s not our job to finish the work, but we can’t turn away from it either.

Do Jewish Your Way

JewPAC (The Jewish Programming Allocation Committee) is a microgrant program to help fund and support students to create their own Jewish experiences at Penn State. Students apply for the funding right on our website. We encourage all of our students to take advantage of the JewPAC program and explore conversations that they would not otherwise have.

My experience on the Perspectives trip provided me a comprehensive understanding of the Israeli-Palestinian conflict while showing me the beauty that Israel has to offer. The discussion-based trip ensured that not only would I learn from prestigious speakers, but also from my direct peers. I found myself not wanting to leave by the end of the trip because of how close-knit the group of students became. It is only a matter of time before I go back to Israel!

“The Perspectives Trip was

one of the most unique and transformative experiences I have had throughout my time at Penn State. I am so appreciative of all that we learned about the Israeli-Palestinian conflict, and I have engaged in many meaningful conversations on this topic since returning home with my family, friends, and peers. This trip perfectly combined the historical and political issues with the significance of emotional and religious ties to the land, and it opened my eyes to new perspectives I have never been exposed to before!

“Participating in the Perspectives tour of Israel

and the West Bank was truly eye-opening and transformative. My understanding of the IsraeliPalestinian conflict was deepened, and I will always value the conversations that were had and relationships that were built on our journey. I am so grateful to Penn State Hillel for creating an experience that uplifted a wide variety of voices and encouraged discussion and critical thinking.

The Perspectives Trip gives student leaders on campus the opportunity to explore Israel and the Palestinian Authority to learn about the conflict. This trip is for students who want to deepen their knowledge, engage in challenging conversations, and help to create an environment of dialogue on campus. Over winter break, 23 students from different backgrounds got on a plane and traveled to Israel where they immersed themselves in learning. With only 5 of those students being

Jewish, we partnered with some incredible students from across Penn State’s campus who are involved in many different organizations. Together we can bridge the gap and learn from one another. Some of the communities included: • Black Student Union • Lion Ambassadors • Interfaith Table • Middle East Club • UPUA Academic Affairs Committee

“Drag Purim, an idea I

wanted to bring to life for a while and it turned out fabulous.

friends and seeing myself and friends grow as people and leaders.

“Interning as a Student Life Coordinator my Senior year. ”

“All of my Challah for

Hunger bakes. Just being with my friends baking and laughing for a good cause.

“Being a facilitator for the

“Going on the Fact

“There are a lot of moments

“Going to Houston for a

that it’s hard to pick just one. Probably my favorite event would have to be doing Nittanyville with Hillel because it is a really special Penn State tradition I would not have done without the support of Hillel. Also, just in general, attending Shabbat with friends and always walking away with leftovers for the weekend.

Keeping Jewish Passion &amp; Engagement Alive, Virtually Hanging out with students over a cup of coffee has been an opportunity for our student leaders and staff to share their passions and build relationships. When the pandemic brought in-person campus life to a sudden halt, the connection generated by these coffee dates gained new importance and meaning, even as they became virtual hangouts.

“In the following weeks after the virus

shut down campus I needed to adapt as a Campus Engagement Intern. I replaced coffee dates with virtual lunches and group conversations with online games.

virtual, I made sure to stay in touch with any current engagees, as well as reaching out to new ones. I made sure to reach out to students during Passover to see how their families were celebrating in these strange times. It was great to hear that students were having zoom seders and were attending the Hillel events. I also had a bunch of conversations with students about how they were dealing with online classes as well as asking them about any new activities or hobbies they’d taken up during quarantine.

“Leaving school and switching to online

was definitely a hard and upsetting transition. I think continuing CEI was a comfort for me and other students, as we could support and talk to each other about all of the changes occurring and challenges arising. Something I practiced with my engagees was casual checkins to see how everyone was doing, and zoom sessions to still be social throughout quarantine.

“Shifting virtually has allowed the CEI

program to engage even further. We now have the ability to text, email, and FaceTime regarding Hillel events and daily conversations. The use of technology has allowed Hillel to remain connected to their students and the connections they have made.

“Patience and adaptation were key in

order to shift gears due to the pandemic. With so much uncertainty and unknowns, understanding that we were all in the same boat allowed for success.

Our coffee dates are supported by our Pour it Forward monthly campaign. To learn more about this campaign and other ways to support Jewish students, please visit our website.

Penn State Hillel by the Numbers

STUDENTS CONNECTED WITH HILLEL AT LEAST ONCE

RAISED BY LEV FOR THON

STUDENTS TOOK CHARGE OF THEIR JEWISH EXPERIENCE THROUGH JEWPAC 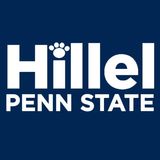