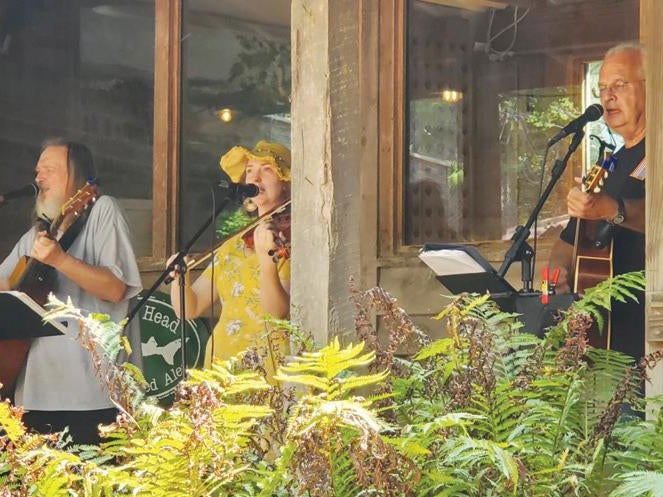 There are a few new watering holes in town, so I decided it was time for yet another epic Sampler adventure, the New Nashville Bar Crawl.

Not the same crawl through my usual local drinking haunts—the Corn Crib Lounge at the Brown County Inn, the Hickory Sports Bar at Out of the Ordinary, the tasting room at the Country Heritage Winery down at Coachlight Square, and the 19th Hole out at the golf course.

The New Nashville Bar crawl would begin at the Ferguson House, and end up at the Seasons Hotel’s new lounge, The Rafters, with many delightful stops in between.

The Ferguson House’s Pioneer Room is a cozy little pocket bar with a couple of tables and a sweet little six-stool bar. The walls are lined with fine large prints from the Frank Hohenberger collection, so patrons can play the game of identifying the old time Brown County characters. There’s Allie Ferguson herself, along with Alex Mullis, sheriff Sam Parks, game warden Oliver Neal, and several scenes of backwoods moonshine stills collected up by the sheriff and revenue agents.

I settled into my preferred spot on the end stool and studied the bottles gathered around the row of beer taps along the back wall, a somehow deeply satisfying tableau that tends to lead one into a meditative state.

There’s something gratifying about bellying up to the public bar and having a few pints in the company of strangers and passing acquaintances. I ordered a glass of beer, and Mrs. Sampler opted for a nice chardonnay, deftly served with a winning smile by our charming bartendress, Lorraine. In fine weather, the Ferguson House features a beer garden out back, at the mouth of “Antique Alley,” with a full bar and live entertainment.

As with most things in life, the perfect Nashville bar crawl is a matter of timing; of being at the right place at the right time. It’s a matter of knowing when to move on to the next thing. The Pioneer closes at four o’clock, perhaps a haven for day-drinkers and senior citizens, but, happily, right around the corner, we discovered the delightful Henhouse, which is an offshoot of The Bird’s Nest restaurant.

Upon entering the Henhouse, I couldn’t help notice that everyone there except for me was female. For a moment, I feared I had wandered across some kind of unknown gender line, that perhaps “Henhouse” was some kind of cultural code I had not properly interpreted.

But then some regular guys came in with their wives (dragged in by their wives, most likely) so I felt better.

I ordered something called a “Hermes pain killer” with tikki rum. The wife had some iteration of a white Russian named a “Caucasian” in honor of “The Dude” from The Big Lebowski.

By early evening, it is time to get some fresh air by taking a little stroll up Van Buren Street to the oldest dining establishment in the county, The Nashville House, and their new addition, “The Hohenberger Bar.”

Like the Pioneer, which has the same owners, The Hohenberger’s walls feature prints from the famous photographer’s collection, leading to another game of “Guess Who?” There’s Wash Barnes, Josh Bond, and old Valentine Penrose.

Our charming and efficient bartender, Sierra, crafted a stiff Old Fashioned for Mrs. Sampler and poured me a Bells dark beer called, humiliatingly for a grown man, “Teddy Bear Kisses.”

The atmosphere is cordial. A couple of shoppers come in for a break in the very comfortable spot.

At what point does simple bar hopping turn in to an out-and-out bar crawl? You’ll know. Just make sure you have a designated driver. Fortunately, I had arranged for my sober brother to transport us to our next stop, The Rafters at Seasons Hotel.

The Season’s bar has been completely transformed into a modern, open and inviting space with a comfortable lounge surrounding a large, three-sided polished granite bar. Stone, wood and metal combined with all new windows and doors create a sleek, plush atmosphere.

The original rustic feel of the Seasons has been retained in the original columns of Brown County stone and the old wooden beams (hence the name).

I ordered a “Caribbean mule” from the new menu and Mrs. Sampler had a glass of white wine. We chatted with some nice folks who had just moved here from Illinois. Relaxing and enjoyable.

As a nightcap, I felt that a little snort of good whiskey might be in order, so I finished my crawl up on Hard Truth Hill, where they make and age all the bourbon they sell right on the property.

One aspect of drinking out in public is just being around people; in a loud, happy room, with several strangers on a cozy stool, staring at the man in the mirror through a forest of bottles.

For those who crave the togetherness and energy of a big crowd, the bar at Hard Truth is the place to be. It is always crowded so, as one online review at their website observed, “Be prepared to wait.”

The industrial-looking 25-stool bar and the huge warehouse-sized dining room have been packed out every time I have been there. In its first year of operation, this place attracted a quarter of a million people.

Judging by the crowds, they must be on to something up there. They are nurturing a community, a culture based in conviviality, accessibility, and a sense of belonging. It is destination drinking, an adult theme park where the theme is drinking.

Let us pause to reconsider the simple joy of that American institution, the humble bar. While sitting home alone, sober, it may not seem that appealing, but after you get out there, find your spot, have a few welcoming libations among the populous at large, it seems right and good, and even fun.

You may even find yourself profoundly satisfied.