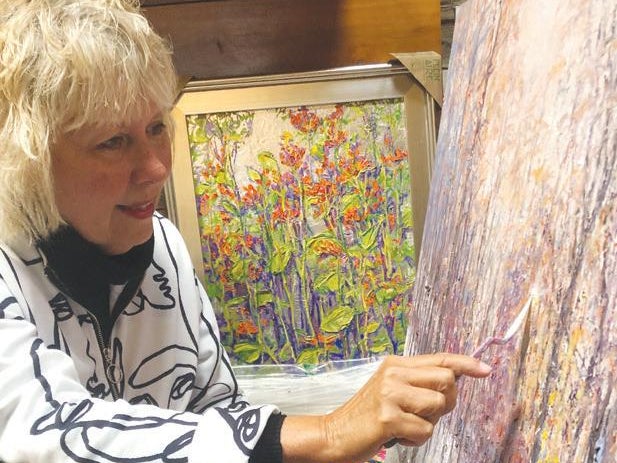 Brown County resident Michele Wedel has loved music and photography since high school, when she used her father’s Nikon film camera to shoot rock stars, including Aerosmith and Ted Nugent. At the time she dreamed of traveling the world on assignments for Rolling Stone magazine, but a 20-year career in corporate America required her to put those passions aside. However, since she moved to Brown County in 2014, she has found ways to reconnect with them, in part as photographer for the Brown County Music Center, where she has shot concerts of acts including Vince Gill, Halestorm, and Kevin Costner.

Wedel had obtained a master’s in adult education and began her career in a student loan company, initially reviewing claims and eventually serving as an officer for the company. She oversaw 18 people in sales and marketing and developed classes to teach students, parents, and teachers about financial literacy, including only borrowing as much as needed.

She used that knowledge to start a Brownsburg-based consulting business through which she helped nonprofits such as Sheltering Wings on staff development, corporations such as Shiel Sexton on how to work with remote staff, and the U.S. Customs and Border Patrol on how to handle on-boarding and succession planning. She still teaches classes on financial literacy at Indiana University’s Kelley School of Business.

About a decade ago, when her mother fell ill, Wedel scaled back her consulting work. Her husband, Dale, who works from home as a software engineer for an Indianapolis consulting firm, suggested she pivot to becoming a photographer. Wedel went back to school, got an associate degree at Ivy Tech and launched her photography business. When the couple moved to Brown County in 2014, she did consulting part-time and photography part-time, generating revenue primarily through high school senior photos and product shots for businesses.

To make connections in the Brown County community—to find out who’s who—she volunteered and used her business acumen on the arts commission for strategic planning. She got to know people at the Brown County Music Center and volunteered to photograph some shows. Her work impressed, and she was hired as house photographer in January 2020.

She said she wanted to get to know the community and figure out her place.

“I don’t try to fix a problem,” she said. “I try to find a solution or fulfill a need.”

How long she gets to shoot during shows at the Music Center usually is determined by the artist. Often, she gets the first three songs to shoot up close, but some artists don’t allow even that. The work can require research. For the Halestorm show, for example, Wedel watched recent concert footage and learned that during the second song, singer Lzzy Hale, stands close to the guitarist. Wedel made sure to capture the moment.

She said she enjoys combining her artistic talents and technical knowledge of photography to capture people during a performance and then share those photos to elicit viewer comments such as, “I remember when they did that song.”

She now is a full-time photographer thanks to the work at the Music Center; senior, engagement, and product photos; and gallery nature/landscape shots. She primarily shoots with two Nikons, a D800 and a D750, mostly using 24-70 and 70-200 mm lenses.

She also enjoys astrophotography. One of her favorite photos shows the Milky Way and a seemingly endless number of stars in the top 75% of the photo, but at the bottom, a group of people is illuminated. Wedel explained that she hit the shutter on the camera and left it open for about 20 seconds, during which she crept up close to the group and used a flashlight to “paint them with light” so that they could be seen in the photo as well. Without that move, the people would have been indistinguishable from the dark landscape.

Wedel said she and her husband are both kind of nerdy—but then she corrected herself and said that he was nerdy, but she was “nerd-adjacent,” a phrase she heard from astrophysicist Phil Plait, who leads the couple on star-gazing excursions.

Despite all her work and hobbies, Wedel finds other ways to give back.

She recently helped a group of veterans process donations for families from Afghanistan who are relocating to the U.S. Wedel said she had always supported the military, in part because her father served in the U.S. Navy. She also wanted to engage in some positive work to help counteract all the negativity, arguing, and people politicizing things that has been going on since the pandemic.

She helped Team Rubicon, a nonprofit founded by a group of former military veterans who use their skills to aid people after disasters. Wedel worked in a warehouse, processed donations of items such as soap, shampoo, and baby formula, or helped sweep and mop—whatever needed to be done to keep processing donations.

Nancy Crocker, a Nashville Town Council member, said Wedel brings positivity and professionalism to everything she does.

“I’m pretty sure I have never seen her without a smile on her face,” Crocker said.

“She has a willingness to contribute to her community and freely gives of her time…but she knows her boundaries and does not agree to do more than she is able,” she said.

“She has taken many pictures of me and all of them are better than anyone else has ever taken. No idea how she does that,” she said.

Wedel shot photos for the music center for eight months before the pandemic hit. She and her husband were fortunate because they could work from home and spend time in beautiful Brown County, but she missed photographing concerts and seeing the community come together.

She has enjoyed the return of live shows at the Brown County Music Center. She shot photos in October at the Melissa Etheridge concert, one of the first after restrictions were eased.

“It was such a cathartic experience,” Wedel said. “Everybody [came] there just for good music.”