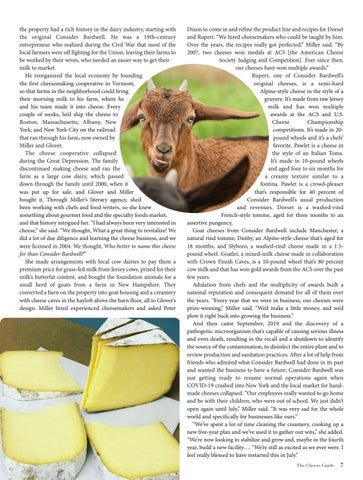 the property had a rich history in the dairy industry, starting with the original Consider Bardwell. He was a 19th-century entrepreneur who realized during the Civil War that most of the local farmers were off fighting for the Union, leaving their farms to be worked by their wives, who needed an easier way to get their milk to market. He reorganized the local economy by founding the first cheesemaking cooperative in Vermont, so that farms in the neighborhood could bring their morning milk to his farm, where he and his team made it into cheese. Every couple of weeks, he’d ship the cheese to Boston, Massachusetts; Albany, New York; and New York City on the railroad that ran through his farm, now owned by Miller and Glover. The cheese cooperative collapsed during the Great Depression. The family discontinued making cheese and ran the farm as a large cow dairy, which passed down through the family until 2000, when it was put up for sale, and Glover and Miller bought it. Through Miller’s literary agency, she’d been working with chefs and food writers, so she knew something about gourmet food and the specialty foods market, and that history intrigued her. “I had always been very interested in cheese,” she said. “We thought, What a great thing to revitalize! We did a lot of due diligence and learning the cheese business, and we were licensed in 2004. We thought, Who better to name this cheese for than Consider Bardwell?” She made arrangements with local cow dairies to pay them a premium price for grass-fed milk from Jersey cows, prized for their milk’s butterfat content, and bought the foundation animals for a small herd of goats from a farm in New Hampshire. They converted a barn on the property into goat housing and a creamery with cheese caves in the hayloft above the barn floor, all to Glover’s design. Miller hired experienced cheesemakers and asked Peter

Dixon to come in and refine the product line and recipes for Dorset and Rupert. “We hired cheesemakers who could be taught by him. Over the years, the recipes really got perfected,” Miller said. “By 2007, two cheeses won medals at ACS [the American Cheese Society Judging and Competition]. Ever since then, our cheeses have won multiple awards.” Rupert, one of Consider Bardwell’s original cheeses, is a semi-hard Alpine-style cheese in the style of a gruyere. It’s made from raw Jersey milk and has won multiple awards at the ACS and U.S. Cheese Championship competitions. It’s made in 20pound wheels and it’s a chefs’ favorite. Pawlet is a cheese in the style of an Italian Toma. It’s made in 10-pound wheels and aged four to six months for a creamy texture similar to a fontina. Pawlet is a crowd-pleaser that’s responsible for 40 percent of Consider Bardwell’s usual production and revenues. Dorset is a washed-rind French-style tomme, aged for three months to an assertive pungency. Goat cheeses from Consider Bardwell include Manchester, a natural rind tomme; Danby, an Alpine-style cheese that’s aged for 18 months; and Slyboro, a washed-rind cheese made in a 1.5pound wheel. Goatlet, a mixed-milk cheese made in collaboration with Crown Finish Caves, is a 10-pound wheel that’s 80 percent cow milk and that has won gold awards from the ACS over the past few years. Adulation from chefs and the multiplicity of awards built a national reputation and consequent demand for all of them over the years. “Every year that we were in business, our cheeses were prize-winning,” Miller said. “We’d make a little money, and we’d plow it right back into growing the business.” And then came September, 2019 and the discovery of a pathogenic microorganism that’s capable of causing serious illness and even death, resulting in the recall and a shutdown to identify the source of the contamination, to disinfect the entire plant and to review production and sanitation practices. After a lot of help from friends who admired what Consider Bardwell had done in its past and wanted the business to have a future, Consider Bardwell was just getting ready to resume normal operations again when COVID-19 crashed into New York and the local market for handmade cheeses collapsed. “Our employees really wanted to go home and be with their children, who were out of school. We just didn’t open again until July,” Miller said. “It was very sad for the whole world and specifically for businesses like ours.” “We’ve spent a lot of time cleaning the creamery, cooking up a new five-year plan and we’ve used it to gather our wits,” she added. “We’re now looking to stabilize and grow and, maybe in the fourth year, build a new facility…. “We’re still as excited as we ever were. I feel really blessed to have restarted this in July.” The Cheese Guide