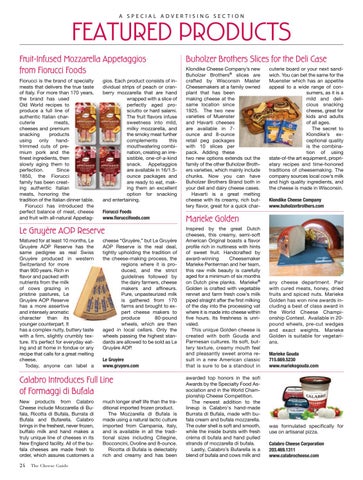 FEATURED PRODUCTS Fruit-Infused Mozzarella Appetaggios from Fiorucci Foods Fiorucci is the brand of specialty meats that delivers the true taste of Italy. For more than 170 years, the brand has used Old World recipes to produce a full line of authentic Italian charcuterie meats, cheeses and premium snacking products using only handtrimmed cuts of premium pork and the finest ingredients, then slowly aging them to perfection. Since 1850, the Fiorucci family has been creating authentic Italian meats, honoring the tradition of the Italian dinner table. Fiorucci has introduced the perfect balance of meat, cheese and fruit with all-natural Appetag-

gios. Each product consists of individual strips of peach or cranberry mozzarella that are hand wrapped with a slice of perfectly aged prosciutto or hard salami. The fruit flavors infuse sweetness into mild, milky mozzarella, and the smoky meat further complements this mouthwatering combination, creating an irresistible, one-of-a-kind snack. Appetaggios are available in 16/1.5ounce packages and are ready to eat, making them an excellent option for snacking and entertaining. Fiorucci Foods www.fioruccifoods.com

Le Gruyère AOP Reserve Matured for at least 10 months, Le Gruyère AOP Reserve has the same pedigree as real Swiss Gruyère produced in western Switzerland for more than 900 years. Rich in flavor and packed with nutrients from the milk of cows grazing in pristine pastures, Le Gruyère AOP Reserve has a more assertive and intensely aromatic character than its younger counterpart. It has a complex nutty, buttery taste with a firm, slightly crumbly texture. It’s perfect for everyday eating and at home in fondue or any recipe that calls for a great melting cheese. Today, anyone can label a

cheese “Gruyère,” but Le Gruyère AOP Reserve is the real deal, tightly upholding the tradition of the cheese-making process, the regions where it is produced, and the strict guidelines followed by the dairy farmers, cheese makers and affineurs. Pure, unpasteurized milk is gathered from 170 farms and brought to expert cheese makers to produce 80-pound wheels, which are then aged in local cellars. Only the wheels passing the highest standards are allowed to be sold as Le Gruyère AOP. Le Gruyère www.gruyere.com

Calabro Introduces Full Line of Formaggi di Bufala New products from Calabro Cheese include Mozzarella di Bufala, Ricotta di Bufala, Burrata di Bufala and Bufarella. Calabro brings in the freshest, never frozen, buffalo milk and hand makes a truly unique line of cheeses in its New England facility. All of the bufala cheeses are made fresh to order, which assures customers a 24

Buholzer Brothers Slices for the Deli Case Klondike Cheese Company’s new Buholzer Brothers® slices are crafted by Wisconsin Master Cheesemakers at a family owned plant that has been making cheese at the same location since 1925. The two new varieties of Muenster and Havarti cheeses are available in 7ounce and 8-ounce retail peg packages with 10 slices per pack. Adding these two new options extends out the family of the other Buholzer Brothers varieties, which mainly include chunks. Now you can have Buholzer Brothers Brand both in your deli and dairy cheese cases. Havarti is a great melting cheese with its creamy, rich buttery flavor, great for a quick char-

cuterie board or your next sandwich. You can bet the same for the Muenster which has an appetite appeal to a wide range of consumers, as it is a mild and delicious snacking cheese, great for kids and adults of all ages. The secret to Klondike’s exceptional quality is the combination of using state-of-the art equipment, proprietary recipes and time-honored traditions of cheesemaking. The company sources local cow’s milk and high quality ingredients, and the cheese is made in Wisconsin. Klondike Cheese Company www.buholzerbrothers.com

Marieke Golden Inspired by the great Dutch cheeses, this creamy, semi-soft American Original boasts a flavor profile rich in nuttiness with hints of sweet fruit. Handcrafted by award-winning Cheesemaker Marieke Penterman and her team, this raw milk beauty is carefully aged for a minimum of six months on Dutch pine planks. Marieke® Golden is crafted with vegetable rennet and farm fresh cow’s milk piped straight after the first milking of the day into the processing vat where it is made into cheese within five hours. Its freshness is unrivaled. This unique Golden cheese is created with both Gouda and Parmesan cultures. Its soft, buttery texture, creamy mouth feel and pleasantly sweet aroma result in a new American classic that is sure to be a standout in awarded top honors in the sofi Awards by the Specialty Food Association and in the World Championship Cheese Competition. The newest addition to the lineup is Calabro's hand-made Burrata di Bufala, made with bufala cream and bufala mozzarella. The outer shell is soft and smooth, while the inside bursts with fresh crèma di bufala and hand pulled strands of mozzarella di bufala. Lastly, Calabro’s Bufarella is a blend of bufala and cows milk and

was formulated specifically for use on artisanal pizza. Calabro Cheese Corporation 203.469.1311 www.calabrocheese.com