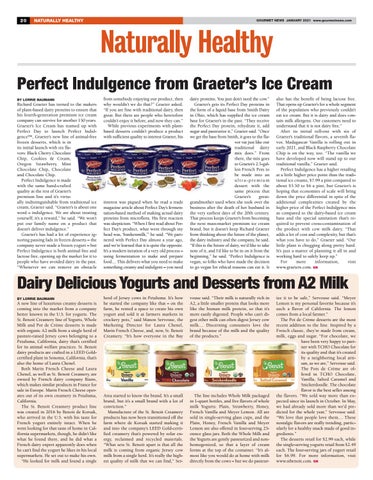 Richard Graeter has turned to the makers of plant-based dairy proteins to ensure that his fourth-generation premium ice cream company can survive for another 150 years. Graeter’s Ice Cream has teamed up with Perfect Day to launch Perfect Indulgence™, Graeter’s new line of animal-free frozen desserts, which is in its initial launch with six flavors: Black Cherry Chocolate Chip, Cookies &amp; Cream, Oregon Strawberry, Mint Chocolate Chip, Chocolate and Chocolate Chip. Perfect Indulgence is made with the same hand-crafted quality as the rest of Graeter’s premium line and it’s virtually indistinguishable from traditional ice cream, Graeter said. “Graeter’s is about one word – indulgence. We are about treating yourself; it’s a reward,” he said. “We won’t put our family name on a product that doesn’t deliver indulgence.” Graeter’s has had a lot of experience ignoring passing fads in frozen desserts – the company never made a frozen yogurt – but Perfect Indulgence is both animal free and lactose free, opening up the market for it to people who have avoided dairy in the past. “Whenever we can remove an obstacle

from somebody enjoying our product, then why wouldn’t we do that?” Graeter asked. “If you are fine with traditional dairy, then great. But there are people who heretofore couldn’t enjoy it before, and now they can.” While previous experiments with plantbased desserts couldn’t produce a product with sufficient quality to interest Graeter, his

interest was piqued when he read a trade magazine article about Perfect Day’s fermentation-based method of making actual dairy proteins from microflora. His first reaction was skepticism. “When I first read about Perfect Day’s product, what went through my head was, ‘frankenmilk,’” he said. “We partnered with Perfect Day almost a year ago, and we’re learned that it is quite the opposite. It’s a modern iteration of a very old process – using fermentation to make and prepare food.... This delivers what you need to make something creamy and indulgent – you need

dairy proteins. You just don’t need the cow.” Graeter’s gets its Perfect Day proteins in the form of a liquid base from Smith Dairy in Ohio, which has supplied the ice cream base for Graeter’s in the past. “They receive the Perfect Day protein, rehydrate it, add sugar and pasteurize it,” Graeter said. “Once we get the base from Smith, it goes to the flavor vat just like our traditional dairy mix does.” From there, the mix goes to Graeter’s 2.5-gallon French Pots to be made into an ultra-premium dessert with the same process that Graeter’s greatgrandmother used when she took over the business after the death of her husband in the very earliest days of the 20th century. That process keeps Graeter’s from becoming the next mass-market premium ice cream brand, but it doesn’t keep Richard Graeter from thinking about the future of the planet, the dairy industry and the company, he said. “If this is the future of dairy, we’d like to take note of it, and I’d like to be in on it from the beginning,” he said. “Perfect Indulgence is vegan, so folks who have made the decision to go vegan for ethical reasons can eat it. It

also has the benefit of being lactose free. That opens up Graeter’s for a whole segment of the population who previously couldn’t eat ice cream. But it is dairy and does contain milk allergens. Our customers need to understand that it is not dairy free.” After its initial roll-out with six of Graeter’s traditional flavors, a seventh flavor, Madagascar Vanilla is rolling out in early 2021, and Black Raspberry Chocolate Chip is on the way, too. “The vanilla we have developed now will stand up to our traditional vanilla,” Graeter said. Perfect Indulgence has a higher retailing at a little higher price point than the traditional ice creams, $7.99 a pint compared to about $5.50 to $6 a pint, but Graeter’s is hoping that economies of scale will bring down the price differential in spite of the additional complexities created by the higher price of the Perfect Indulgence mix as compared to the dairy-based ice cream base and the special sanitation that’s required to prevent cross-contamination of the product with cow milk dairy. “That adds a lot of cost and complexity, but that’s what you have to do,” Graeter said. “Our little plant is chugging along pretty hard. It’s just a matter of planning it all in and working hard to safely keep up.” For more information, visit www.graeters.com. GN

Dairy Delicious Yogurts and Desserts from A2 Milk BY LORRIE BAUMANN

A new line of luxurious creamy desserts is coming into the market from a company better known in the U.S. for yogurts. The St. Benoit Creamery line of Yogurts, Whole Milk and Pot de Crème desserts is made with organic A2 milk from a single herd of pasture-raised Jersey cows belonging to a Petaluma, California, dairy that’s certified for its animal welfare practices. St. Benoit dairy products are crafted in a LEED Goldcertified plant in Sonoma, California, that’s also the home of Laura Chenel. Both Marin French Cheese and Laura Chenel, as well as St. Benoit Creamery, are owned by French dairy company Rians, which makes similar products in France for sale in Europe. Marin French Cheese operates out of its own creamery in Petaluma, California. The St. Benoit Creamery product line was created in 2016 by Benoit de Korsak, who arrived in the U.S. with his taste for French yogurt entirely intact. When he went looking for that taste of home in California supermarkets, though, he didn’t like what he found there, and he did what a French dairy expert apparently does when he can’t find the yogurt he likes in his local supermarkets. He set out to make his own. “He looked for milk and found a single

herd of Jersey cows in Petaluma. It’s how he started the company like that – on the farm, he rented a space to create his own yogurt and sold it at farmers markets in crockery pots,” said Manon Servouse, the Marketing Director for Laura Chenel, Marin French Cheese, and, now, St. Benoit Creamery. “It’s how everyone in the Bay

vouse said. “Their milk is naturally rich in A2, a little smaller protein that looks more like the human milk protein, so that it’s more easily digested. People who can’t digest other milk can often digest Jersey cow milk.... Discerning consumers love the brand because of the milk and the quality of the products.”

Area started to know the brand. It’s a small brand, but it’s a small brand with a lot of conviction.” Manufacture of the St. Benoit Creamery products has now been transitioned off the farm where de Korsak started making it and into the company’s LEED Gold-certified creamery that’s powered by solar energy, reclaimed and recycled materials. “What sets St. Benoit apart is that all the milk is coming from organic Jersey cow milk from a single herd. It’s really the highest quality of milk that we can find,” Ser-

The line includes Whole Milk packaged in 1-quart bottles, and five flavors of whole milk Yogurts: Plain, Strawberry, Honey, French Vanilla and Meyer Lemon. All are sold in single-serving glass cups, and the Plain, Honey, French Vanilla and Meyer Lemon are also offered in four-serving 23ounce glass jars. Both the Whole Milk and the Yogurts are gently pasteurized and nonhomogenized, so that a layer of cream forms at the top of the container. “It’s almost like you would do at home with milk directly from the cows – but we do pasteur-

ize it to be safe,” Servouse said. “Meyer Lemon is my personal favorite because it’s such a flavor of California. The lemon comes from a local farmer.” The Pot de Crème desserts are the most recent addition to the line. Inspired by a French classic, they’re made from cream, milk, eggs and sugar. “For chocolate, we have been very happy to partner with TCHO Chocolate for its quality and that it’s created by a neighboring local artisan, as we are,” Servouse said. The Pots de Crème are offered in TCHO Chocolate, Vanilla, Salted Caramel and Snickerdoodle. The chocolate flavor is the best seller among the flavors. “We sold way more than expected since its launch in October. In May, we had already sold more than we’d predicted for the whole year,” Servouse said. “We love that people love them.... These nostalgic flavors are really trending, particularly for a healthy snack made of good ingredients.” The desserts retail for $2.99 each, while the single-serving yogurts retail from $2.49 each. The four-serving jars of yogurt retail for $6.99. For more information, visit www.stbenoit.com. GN