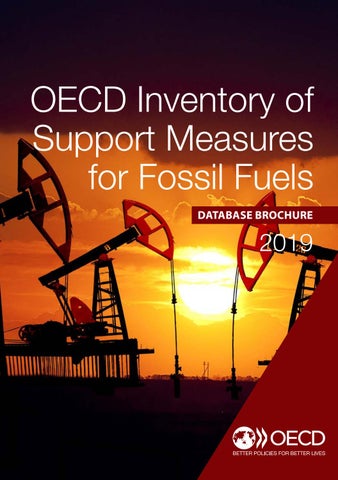 About the OECD OUR MISSION The Organisation for Economic Coâ&#x20AC;&#x2018;operation and Development (OECD) provides its 36 Member countries with a forum to work together, share experiences and seek solutions to common problems. We work with governments to understand what drives economic, social and environmental change. We analyse and compare data to predict future trends. We set international standards on wide range of subjects, from climate change and trade to chemicals safety. The common thread of our work is a shared commitment to market economies backed by democratic institutions and focused on the wellâ&#x20AC;&#x2018;being of all citizens.

The OECD and the G20 At the invitation of each Presidency, the OECD has acted as a strategic advisor to the G20. The OECD participates in all G20 Working Group meetings and provides data, analytical reports and proposals on specific topics, often alongside other relevant international organisations. The OECD supports the G20 process by: •

Helping to define the agenda by developing narratives

Forging consensus across the membership around the Presidency’s priorities

Ensuring that legacies and commitments from previous Presidencies are monitored and delivered.

Joint OECD and IEA work on fossil fuels is one integral part of that work.

The OECD helps governments track support for fossil fuels Fossil-fuel subsidies are environmentally harmful, costly, and distortive. Not only do they undermine global efforts to mitigate climate change, but they also aggravate local pollution problems, causing further damage to human health and the environment. They also represent a considerable strain on public budgets, draining scarce fiscal resources that could be invested in the education, skills, and physical infrastructure. Many governments, including members of the G20 and of the Asia‑Pacific Economic Cooperation (APEC), recognise the problems that fossil-fuel subsidies cause at home and abroad. In 2009 both committed

to “rationalise and phase out over the medium term inefficient fossil fuel subsidies that encourage wasteful consumption.” A number of countries have since translated those commitments into concrete policy actions and removed some of the subsidies they had in place. However, lack of information about the scope, magnitude, and effects of fossil-fuel subsidies remains an important obstacle to current and future reform efforts. To help governments reform their fossil-fuel subsidies, the OECD

produces and maintains an online Inventory of Support Measures for Fossil Fuels, which systematically identifies, documents, and

estimates the value of support arising from more than 1 000 individual policies that encourage the production or consumption of fossil fuels. This unique source of information covers 44 countries, including all 36 OECD Members and a greater number of sub-national jurisdictions in the case of federations (e.g. all Canadian provinces, 11 US states, and 26 sub-national entities in China). The OECD Inventory includes both direct budgetary transfers and tax concessions that in some way provide a benefit or preference for fossilfuel production or consumptions. In that sense, the OECD Inventory

promotes the transparency of public policies and government budgets, and a greater accountability about how public resources are used. Along with

the Inventory, the OECD Companion to the Inventory of Support Measures for Fossil Fuels report describes the policy

The OECD Secretariat chairs the G20 peer reviews The OECD played a Secretariat role for the voluntary and country-led peer reviews of China, Germany, Indonesia, Italy, Mexico and the United States. Under the six completed peer reviews, more than one hundred government policies were discussed and evaluated. Subsidies reviewed were mostly direct transfers and tax expenditures, twothirds of which were directed to endusers of fossil fuels.

The peer reviews of inefficient fossil-fuel subsidies are a mechanism for information generation and sharing, knowledge exchange, and an invaluable commitment to transparency.

They encourage capacity building in the measurement and tracking of government policies that may confer a benefit to the use and production of fossil fuels. For countries under review, the peer reviews create an opportunity for cross-ministerial co-ordination and discussion on policy coherence. The peer reviews bring to light, for both countries under review and participating panel members, the task for governments to regularly evaluate subsidiesâ&#x20AC;&#x2122; effectiveness and efficiency, and therefore their relevance, as policy instruments. The review processes also provide successful examples of reforms.

Country 2 Note: Starting from the left side of the chart, the process begins with an agreement on the ToR and ends with a final report. This was the process for the first six peer reviews but could change at the request of member countries.

The peer-review process The G20 voluntary peer review is a multi-stage process that can be summarised in 8 steps.

1. Selecting a partner country that will undertake the peer review in parallel

3. Assigning a Secretariat to facilitate and chair the process

4. Developing the self-review of fossil-fuel subsidies to be evaluated and those identified as inefficient and candidates for reform (if any).

5. Designating the review-team members: countries, IOs, and other experts (if desired)

8. Producing a final peer review report along with the self-review. The final report is prepared by the Secretariat in consultation with the review panel

The combustion of fossil fuels in power plants, vehicles, machinery, and dwellings continues to be a leading contributor to global man-made greenhouse-gas emissions. Although many governments have already taken steps to reduce the carbon intensity of their economies, some policies remain in place that encourage the production and use of fossil fuels. Fossil-fuel subsidies are one such policy. The OECD Inventory of Support Measures for Fossil Fuels systematically identifies, documents, and estimates the value of support arising from more than 1Â 000 individual policies that encourage the production or consumption of fossil fuels.

The combustion of fossil fuels in power plants, vehicles, machinery, and dwellings continues to be a leading contributor to global man made...

The combustion of fossil fuels in power plants, vehicles, machinery, and dwellings continues to be a leading contributor to global man made...