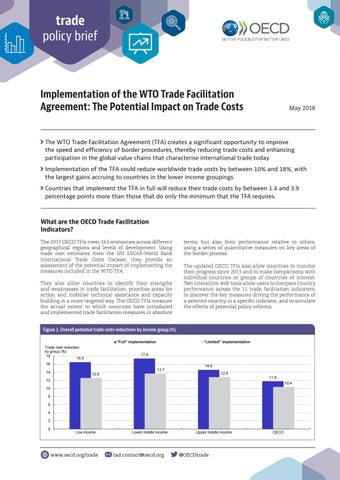 Implementation of the WTO Trade Facilitation Agreement: The Potential Impact on Trade Costs

The WTO Trade Facilitation Agreement (TFA) creates a significant opportunity to improve the speed and efficiency of border procedures, thereby reducing trade costs and enhancing participation in the global value chains that characterise international trade today. Implementation of the TFA could reduce worldwide trade costs by between 10% and 18%, with the largest gains accruing to countries in the lower income groupings. ountries that implement the TFA in full will reduce their trade costs by between 1.4 and 3.9 C percentage points more than those that do only the minimum that the TFA requires.

What are the OECD Trade Facilitation Indicators? The 2017 OECD TFIs cover 163 economies across different geographical regions and levels of development. Using trade cost estimates from the UN ESCAP-World Bank International Trade Costs Dataset, they provide an assessment of the potential impact of implementing the measures included in the WTO TFA. They also allow countries to identify their strengths and weaknesses in trade facilitation, prioritise areas for action and mobilise technical assistance and capacity building in a more targeted way. The OECD TFIs measure the actual extent to which countries have introduced and implemented trade facilitation measures in absolute

terms, but also their performance relative to others, using a series of quantitative measures on key areas of the border process. The updated OECD TFIs also allow countries to monitor their progress since 2013 and to make comparisons with individual countries or groups of countries of interest. Two interactive web tools allow users to compare country performance across the 11 trade facilitation indicators, to discover the key measures driving the performance of a selected country in a specific indicator, and to simulate the effects of potential policy reforms.

Implementation of the WTO Trade Facilitation Agreement: The Potential Impact on Trade Costs What reduction in trade costs is expected from implementation of the TFA? The calculation of the potential impact of the TFA is based on two scenarios: a) a “full” implementation scenario where countries implement all the options contained in the Agreement, including those formulated on a “best endeavours” basis; and b) a “limited” implementation scenario where countries implement only the mandatory provisions contained in the Agreement, but taking into account that some of the best endeavours measures have already been implemented by some of these countries. These two scenarios provide upper and lower bounds of potential trade cost reductions likely to be obtained by implementing the TFA. The impact will be strongly influenced by the way developing countries categorise various measures and by the timeframes they adopt for implementation.

mandatory provisions. The opportunity costs are particularly high for the low and lower middle income country groups, as many upper middle and high income countries already implement measures that are formulated on a “best endeavours” basis.

What trade facilitation measures estimated to have the greatest impact?

Improvements in the area of formalities (simplification of trade documents; streamlining of border procedures; and automation of the border process) appear to have the greatest impact on trade costs, generating cost savings of 2.8% to 4.2% depending on the level of development. Other policy areas that have an important potential for cost reductions are the availability of trade-related information and the possibility to request advance rulings.

For low income countries the measures with the potential to most reduce trade costs are: harmonising and simplifying trade documents (4.2%); automating trade and customs processes (3.6%); ensuring the availability of trade-related information (2.8%) and streamlining border procedures (2.8%).

If countries limit themselves to the mandatory provisions of the Agreement, the potential reduction reaches 12.6% for LICs, 13.7% for LMICs, 12.8% for UMICs and 10.4% for OECD countries.

For lower middle income countries, streamlining border procedures are estimated to have the greatest impact (3.9%), while harmonising and simplifying trade documents and automating trade and customs procedures would reduce costs by 3.5% and 2.9% respectively.

A higher level of ambition in implementing the best endeavours provisions of the TFA would generate very substantial benefits of 3.9, 3.7, 1.8 and 1.4 percentage points more than if countries only implemented

What support is available to help countries implement trade facilitation measures? Expenses for purchasing equipment, training officials and putting in place new measures have benefitted from substantial technical and financial assistance for trade facilitation over the last decade. Since 2005, approximately USD 3.9 billion has been disbursed in aid for trade facilitation. Donor commitments directed to simplifying and modernising border rules and procedures reached USD 363 million in 2016, a fivefold increase from the 2002-05 baseline average. Donor support for trade facilitation was also relatively resilient during the global economic crisis; the decline experienced since 2013 may reflect difficulties related to ascribing assistance to the implementation of the WTO TFA while WTO Members’ notifications of TFA Category B and C commitments were still at an early stage. In addition, the equipment and infrastructure needs of trade facilitation reforms have also benefited from the substantial funds directed to trade-related infrastructure, with USD 18 billion devoted to transport and storage and USD 0.6 billion devoted to communications in 2016.

Enquiry points; publication of trade information, including on Internet

Involvement of the Trade Community

Prior statements by the administration to requesting traders concerning the classification, origin, valuation method, etc., applied to specific goods at the time of importation; the rules and process applied to such statements

The possibility and modalities to appeal administrative decisions by border agencies

Acceptance of copies, simplification of trade documents; harmonisation in accordance with international standards 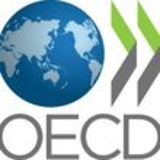