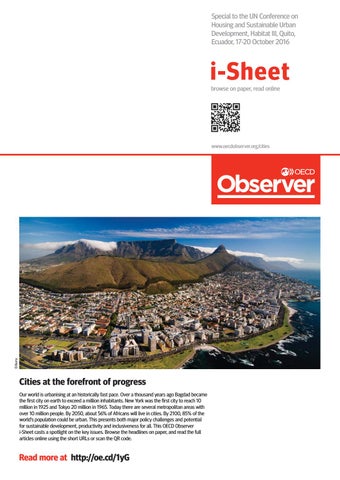 Cities at the forefront of progress Our world is urbanising at an historically fast pace. Over a thousand years ago Bagdad became the ﬁrst city on earth to exceed a million inhabitants. New York was the ﬁrst city to reach 10 million in 1925 and Tokyo 20 million in 1965. Today there are several metropolitan areas with over 10 million people. By 2050, about 56% of Africans will live in cities. By 2100, 85% of the world’s population could be urban. This presents both major policy challenges and potential for sustainable development, productivity and inclusiveness for all. This OECD Observer i-Sheet casts a spotlight on the key issues. Browse the headlines on paper, and read the full articles online using the short URLs or scan the QR code.

Tokyo from train in motion, not digitally altered

A 21st century vision for urbanisation

If urbanisation is one of the most important global trends of the 21st century, with some 70% of the world’s population forecasted to live in cities by 2050, then urbanisation in Africa–and the ways in which that growth occurs–marks one of the most signiﬁcant opportunities for achieving global sustainable development.

In 1950 New York and Tokyo were the only urban agglomerations on the planet with populations in excess of 10 million. By 2030, the number of megacities is projected to increase to 41, with seven of the world’s top ten megacities in Asia. Cities of around 2-5 million are also becoming far more commonplace. Our metropolitan century presents challenges and opportunities for policy makers.

A city’s metropolitan governance structure has a critical inﬂuence on the quality of life and economic outcomes of its inhabitants. Administrative fragmentation complicates policy coordination, whereas good governance in well-designed metropolitan authorities brings beneﬁts for transport, the environment and more.

In October, world leaders will gather in Quito for the Habitat III summit to launch the New Urban Agenda. This is on top of the start this year of the implementation of the Sustainable Development Goals.

The use of land: Why planners cannot go it alone

For Bangkok, and its surrounding ﬁve provinces, green cities are a matter of survival. This is a ﬂood-prone area, which climate change is rendering more vulnerable. No surprise therefore that the Bangkok Metropolitan Region (BMR) should have no shortage of climate change action plans and green growth strategies.

How land is used determines more in our daily lives than we may realise. Whether getting to work, school or a hospital, or taking a bus or a train, these choices are often made easier or more diﬃcult by land-use planning. It’s high time for policy makers of all stripes to take land use far more seriously.

Urban and rural income per capita

Income inequality between China’s rural and urban areas has surged in recent years. The per capita income of urban households in 2012 was about 3.1 times that of the rural households, whereas in 1978 it was about 2.5 times higher, the OECD’s Urban Policy Review of China shows. Why?

Where cities can take Africa

African cities can be actors of structural transformation

Local logic: How cities can make a diﬀerence

African nations are exploring how best to harness the potential of cities as agents of change to achieve progress towards the Sustainable Development Goals and the African Union’s Agenda 2063.

On all continents, the local level of power has become a driver of social innovation and public policy.

Cities like Tangier in the north of Morocco, which has transformed in 15 years into a vibrant metropolitan area of 1.5 million inhabitants, show how Africa’s cities and towns can fuel the entire continent’s sustainable development.

It’s hard to breathe in Onitsha, a major river port in Nigeria. The air is dark with car fumes. Old freighters on the River Niger expel smoke. Burning rubbish dumps outside the city’s many sprawling markets thicken the air even further.

Governing megacities The ancient Roman scholar Marcus Terentius Varro once wrote, “Divine Nature gave the ﬁelds, human art built the cities.” The adage is still very relevant at the turn of the 21st century. Nowadays, nearly two-thirds of the population of the OECD area lives in cities.

What city mayors are doing to ﬁght climate change

Innovation and urban mobility in Brazil

Integrated planning, supported by clear public policies, new technologies and ways to safeguard the environment, is the path towards sustainable mobility in cities in Brazil.

Unlike in many other regions of the world, people quitting the countryside to settle in cities will not be the main driver of Africa’s urban growth. City and regional policies must go hand in hand as a result.

BOOKSHOP Cities at the forefront of ﬁghting climate change

Paris lights the way on climate

To order these titles and more go to:

Relive the must-go global meeting of the year. www.oecd.org/forum - #OECDwk

OECD Observer i-Sheet: Cities at the forefront of progress

OECD Observer i-Sheet: Cities at the forefront of progress