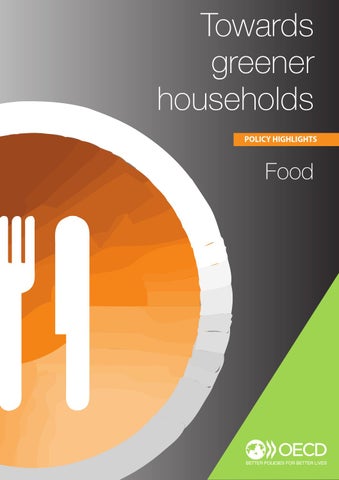 Analysing attitudes to food Personal behaviour and choices in daily life, from what we eat to how we get to work or heat our homes, have a significant – and growing – effect on the environment. But why are some households greener than others? And what factors motivate green household choices? Answering these questions is vital for helping governments design and target policies that promote “greener” behaviour. The OECD’s Environmental Policy and Individual Behaviour Change (EPIC) survey is designed to do just that. Drawing on observations from over 12 000 respondents in 11 OECD countries (Australia, Canada, Chile, France, Israel, Japan, Korea, the Netherlands, Spain, Sweden and Switzerland), this large-scale household survey conducted in 2011 explores what drives household environmental behaviour and how policies may affect household decisions. It focuses on five areas in which households have significant environmental impact: energy, food, transport, waste and water.

Food and the environment In a context of a growing population, rising incomes and lifestyle changes, food production and consumption exert ever-growing pressure on the environment. The intensification of agricultural production methods and a number of food scares have also raised consumer concerns. Coupled with concerns about the environment and health, these have induced some people to increase their consumption of more environment-friendly products, including organic food. The EPIC survey examined what drives household consumption of organic fruit and vegetables and meat products that take animal welfare into account.

Percentage of total expenditure on fresh fruits and vegetables

Questions asked to households included their expenditure on organic fruit and vegetables and humanely-produced meat as well as how much more they would be willing to pay for these products; the amount of food thrown away and the amount of food waste composted, etc. The responses were crossanalysed with a wide range of attitudinal and socioeconomic data for the respondent households.

Organic fruit & vegetables Note: Figures may be overestimated because they depend on respondents’ own estimates; there may also be confusion over what constitutes an organic label.

on average of surveyed households’ fruit and vegetable expenditures are reportedly on organic produce (see figure above). These figures may be overestimations, however, as they are stated by respondents and not measured using scanner-based data.

of households’ meat budget goes on products labelled as taking animal welfare into account. The average varies from 23% in Japan and Korea to 53% in Switzerland.

of food bought by surveyed households is reportedly thrown away overall. Country median values vary: from 6% in France to 14% in Israel and 15% in Korea.

of households on average compost their food waste. Respondents who are more likely to compost are older, have larger households, less income and live in a detached or semi-detached house.

What determines green behaviour? Awareness. Environmental concern plays a central role in whether people use and trust organic labels and buy organic food. Those who are concerned about the environment spend more on organic and humanely-produced food. They also tend to throw away less food.

Trust and recognition. Trust in the certification and labelling process was the second most important reason given for not wanting to pay more for organic food. In France and Sweden, more than 90% of respondents recognise the national organic food logo, while in Australia, Canada, Israel, Japan and Spain, less than 30% of the respondents did. About half of the respondents who recognised a logo also used it. Waste charges. Respondents charged for their waste are 8% more likely to compost their food waste and 5% more likely to regularly purchase food items with less packaging.

Price. In all countries, lower prices would encourage respondents to buy more organic food. Those respondents who declared that they were not willing to pay extra for organic fresh fruit and vegetables were asked to state why: in all countries except Korea, the most common response was because “they do not think they should have to pay extra”.

Consider supply side policies measures which can help to decrease the organic food price premium compared to conventional products.

Improve communication between the agricultural sector and the general public on the higher costs involved in organic and humane farming.

Do more to increase awareness and knowledge of the benefits of organic food, in particular among young respondents – especially men – who consume less organic and humanely-produced food.

Increase awareness of and trust in organic food labels, in particular among young respondents (18 to 34 year olds). The growing number of (private and public) labels for agricultural practices and food quality may have caused some confusion among consumers. In Australia, for instance, there are as many as six different labels for organic food.

Focus on food waste collection systems in urban areas, and on promoting composting in rural areas. Consider introducing a waste fee based on the volume or weight of waste collected to encourage households to waste less food. Target campaigns to diminish food waste towards younger individuals and households with young children.

This work is published on the responsibility of the Secretary-General of the OECD. The opinions expressed and arguments employed herein do not necessarily reflect the official views of the Organisation or of the governments of its member countries. This document and any map included herein are without prejudice to the status of or sovereignty over any territory, to the delimitation of international frontiers and boundaries and to the name of any territory, city or area.

In a context of a growing population, rising incomes and lifestyle changes, food production and consumption exert ever-growing pressure on t...

In a context of a growing population, rising incomes and lifestyle changes, food production and consumption exert ever-growing pressure on t...