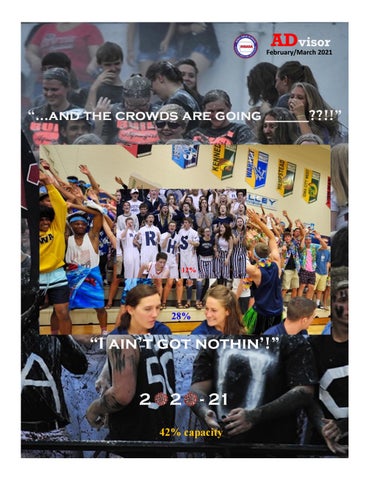 DISTRICT ATHLETIC DIRECTORS OF THE YEAR -

2021 marks the sixth year of recognizing conferences whose Athletic Directors are all members of the IHSADA. Currently, 16 conferences have gained the “ALL IN” status. Congratulations to all these conference schools and their athletic directors!!!

If you don’t take the time to design and plan your life you will have to settle for what life gives you. ...From the ARCHIVES - George Patton -

LEADERSHIP All of us should adopt the attitude of the blind man who was being led down the street by a seeing-eye dog. When they came to the corner of a busy intersection, the dog crossed against the light. The blind man had no choice but to follow. Cars swerved to avoid them; drivers honked their horns and swore loudly. Somehow, the duo reached the other side unharmed. As they stopped on the corner, the blind man reached into his pocket, pulled out a dog biscuit, and offered it to the reckless canine. Having just watched the two as they crossed, a by-stander tapped the blind man on the shoulder and said, “Sir, that dog almost got you killed. The last thing you should do is give him a biscuit as a reward.” The blind man smiled and said, “I’m not giving him a reward. I’m trying to find his mouth so I can kick him in the ass.” Whenever you find yourself moaning about some difficulty, remember that blind man. Give adversity a swift kick in the rear end. Drop the selfpity, throw out the crutches, trash the excuses. Do something positive.