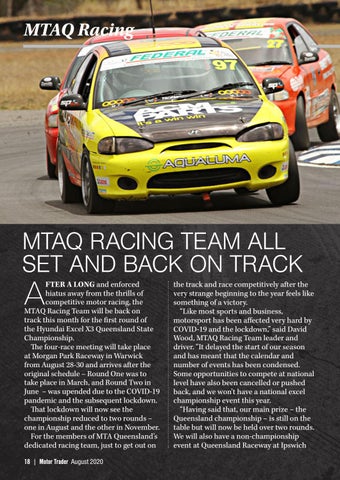 MTAQ RACING TEAM ALL SET AND BACK ON TRACK

FTER A LONG and enforced hiatus away from the thrills of competitive motor racing, the MTAQ Racing Team will be back on track this month for the first round of the Hyundai Excel X3 Queensland State Championship. The four-race meeting will take place at Morgan Park Raceway in Warwick from August 28-30 and arrives after the original schedule – Round One was to take place in March, and Round Two in June – was upended due to the COVID-19 pandemic and the subsequent lockdown. That lockdown will now see the championship reduced to two rounds – one in August and the other in November. For the members of MTA Queensland&#39;s dedicated racing team, just to get out on

the track and race competitively after the very strange beginning to the year feels like something of a victory. “Like most sports and business, motorsport has been affected very hard by COVID-19 and the lockdown,” said David Wood, MTAQ Racing Team leader and driver. “It delayed the start of our season and has meant that the calendar and number of events has been condensed. Some opportunities to compete at national level have also been cancelled or pushed back, and we won’t have a national excel championship event this year. “Having said that, our main prize – the Queensland championship – is still on the table but will now be held over two rounds. We will also have a non-championship event at Queensland Raceway at Ipswich

Motor Trader e-magazine is a monthly publication from the Motor Trades Association of Queensland. It's packed with news and info from the automotive world, including articles on innovation, classic cars, expos, training and more.