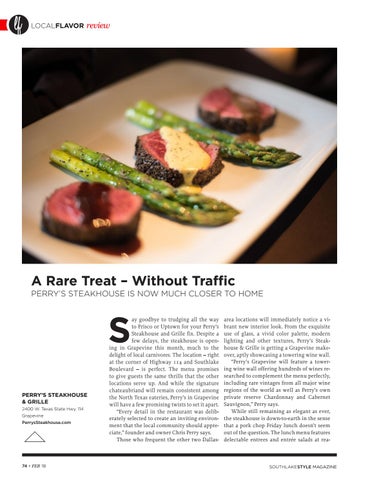 ay goodbye to trudging all the way to Frisco or Uptown for your Perry’s Steakhouse and Grille fix. Despite a few delays, the steakhouse is opening in Grapevine this month, much to the delight of local carnivores. The location – right at the corner of Highway 114 and Southlake Boulevard – is perfect. The menu promises to give guests the same thrills that the other locations serve up. And while the signature chateaubriand will remain consistent among the North Texas eateries, Perry’s in Grapevine will have a few promising twists to set it apart. “Every detail in the restaurant was deliberately selected to create an inviting environment that the local community should appreciate,” founder and owner Chris Perry says. Those who frequent the other two Dallas-

area locations will immediately notice a vibrant new interior look. From the exquisite use of glass, a vivid color palette, modern lighting and other textures, Perry’s Steakhouse &amp; Grille is getting a Grapevine makeover, aptly showcasing a towering wine wall. “Perry’s Grapevine will feature a towering wine wall offering hundreds of wines researched to complement the menu perfectly, including rare vintages from all major wine regions of the world as well as Perry’s own private reserve Chardonnay and Cabernet Sauvignon,” Perry says. While still remaining as elegant as ever, the steakhouse is down-to-earth in the sense that a pork chop Friday lunch doesn’t seem out of the question. The lunch menu features delectable entrees and entrée salads at rea- 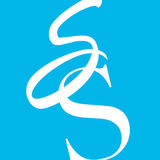