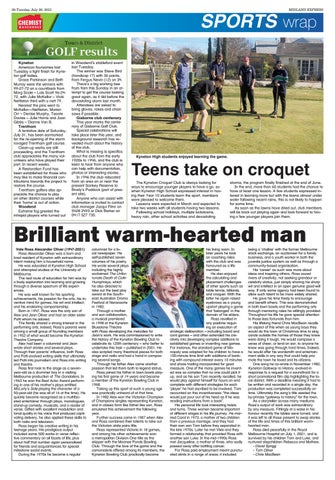 GOLF results Kyneton American foursomes last Tuesday a tight finish for Kyneton golf ladies. Grace Parkinson and Beth Murray were the winners with 99-27-72 on a countback from Marg Scole – Lois Scott 96-2472, with Julie McKellar – Vicki Nettleton third with a nett 79. Nearest the pins went to McKellar—Nettleton, Marian Orr – Denise Murphy, Teoate Davies – Julie Harris and Joan Gibbs – Dianne Van B. Trentham A tentative date of Saturday, July 31, has been earmarked for the re-opening of the storm ravaged Trentham golf course. Clean-up works are still proceeding, and the Trentham club appreciates the many volunteers who have played their part. In recent weeks. A Restoration Fund has been established for those who may like to make financial contributions towards the project to restore the course. Trentham golfers also appreciate the chance to play on other district courses while their ‘home’ is out of action. Woodend Extreme fog greeted the intrepid players who turned out

in Woodend’s stableford event last Tuesday. The winner was Steve Bird (handicap 17) with 36 points, from Fergus Nevin (12) on 34. There’s a big working bee from 9am this Sunday in an attempt to get the course looking great again, as it did before the devastating storm last month. Attendees are asked to bring gloves, rakes and chain saws if possible. Gisborne club centenary This year marks the centenary of Gisborne Golf Club. Special celebrations will take place later this year, and background research has revealed much about the history of the club. What is missing is specifics about the club from the early 1920s to 1946, and the club is keen to hear from anyone who can help with documentation, photos or interesting stories. In 1946 the club relocated from an area on or near the present Sankey Reserve to Brady’s Paddock (part of present site). Anyone who can assist with information is invited to contact club manager Jacqui Flinn on 5428 2493 or Dick Barker on 0417 527 735.

Teens take on croquet The Kyneton Croquet Club is always looking for ways to encourage younger players to have a go, so when Kyneton High School expressed interest in having their Year 10 students learn the sport, members were pleased to welcome them. Lessons were expected in March and expected to take two weeks with all students having two lessons. Following school holidays, multiple lockdowns, heavy rain, other school activities and devastating

storms, the program finally finished at the end of June. In the end, more than 60 students had the chance to have at least one lesson. A few students expressed interest in learning more but with the lawns almost under water following recent rains, this is not likely to happen for some time. As soon as the lawns have dried out, club members will be back out playing again and look forward to having a few younger players join them.

Brilliant warm-hearted man Vale Ross Alexander Oliver (1947-2021) Ross Alexander Oliver was a born and bred resident of Kyneton with extraordinary talent making him a household name. He was educated at Kyneton High School and attempted studies at the University of Melbourne. The real route of education for him was by a lively exploration into learning and growing through a diverse spectrum of life experiences. He was well known for his sporting achievements, his passion for the arts, his inventive mind for games, his wit and intellect, and his endearing companionship. Born in 1947, Ross was the only son of Alex and Jean Oliver and had an older sister Patti whom he adored. The family shared a strong interest in the performing arts; indeed, Ross’s parents were among a small group of founding members in 1952 of what would become the Kyneton Theatre Company. Alex had been a columnist and Jean wrote short stories and several plays. Through their parents’ influence, both Ross and Patti evolved writing skills that ultimately led Patti into journalism and Ross into writing and theatre. Ross first took to the stage as a sevenyear-old as a drummer boy in a visiting Melbourne production of The Gondoliers. In 1963 he won the Best Actor Award performing in one of his mother’s plays entitled McLarty’s Sale playing the character of a 50-year-old (he was all of 16 at the time). He quickly became recognised as a multifaceted entertainer through plays, monologues, stand-up comedy, musicals, and a reader of verse. Gifted with excellent modulation and tonal quality in his voice that produced captivating delivery, he also applied these skills to both radio and television. Ross began his creative writing in his teenage years. His prodigious output included some 500 works in verse reflective commentary on all facets of life, plus about half that number again personalised for friends and acquaintances for special milestone social events. During the 1970s he became a regular

columnist for a local newspaper. He self-published seven volumes of his poetry. He wrote several plays including the highly acclaimed The Unfortunate Death of Colin Humphreys, which he also directed to take out the best play award at the Southeast Australian Drama Festival at Naracoorte in 1982. Through a mother and son collaboration, a musical premiered in 1998 at the Kyneton Bluestone Theatre with Ross developing the melodies for Jean’s work. He was commissioned to write the history of the Kyneton Bowling Club to celebrate its 125th centenary – who better to undertake this task – published in 2001. He also scripted many theatrical pieces for both stage and radio and had a hand in composing several songs. Through his father Alex came another passion that led them both to legend status. Ross joined his father in lawn bowls playing his first game at 14 years and became a member of the Kyneton Bowling Club in 1968. Taking up this sport at such a young age was practically unheard of at that time. In 1982 Alex won the Victorian Champion of Champions singles representing Kyneton, and in classic form like father like son, Ross emulated this achievement the following year. Further success came in 1987 when Alex and Ross combined their talents to take out the Victorian state pairs title. Ross represented Victoria in 18 games, and among his other achievements won a metropolitan Division One title as the skipper with the Moonee Ponds Bowling Club. Through the love of the game and the camaraderie offered among its members, the Kyneton Bowling Club practically became

his living room. In later years he took on coaching roles with the club and was honoured as a life member. He also enjoyed the calculating and placement challenges of other sports such as table tennis, billiards, and croquet. With the latter he again raised eyebrows as a young upstart playing a game that ‘belonged’ in the domain of his elders. Ross revelled in any pastime requiring an execution of strategic deliberation – including board and card games – and often extended his creativity into developing complex additions to established games or inventing new games. For instance, the standard game of Monopoly was adapted for his children to have a 100-minute time limit with additions of banking with compound interest every 10 minutes and share trading incorporated for good measure. One of the many games he invented was so complex that no one could pick it up, and as his son Tom recently recalled, he would play against himself for hours on end complete with different strategies for each ‘player’ he had ascribed to be involved. Tom recounted on this inventiveness: “the ideas would just pour out of his head as if he was reading instructions from a book”. His personal life took interesting twists and turns. Three women became important at different stages in his life journey. He married Carol in 1973, a mother of two children from a previous marriage, and they had their own son Tom before they separated in the late 1970s. Later he met Vikki and they formed a relationship that provided Ross with another son Luke. In the mid-1990s Ross met Jacqueline, a mother of three, who sadly passed away after battling cancer. For Ross paid employment meant punctuated stints in a range of areas; it included

being a ‘chalkie’ with the former Melbourne stock exchange, an auctioneer for a family business, and a youth worker in both the juvenile justice system as well as through a community-based organisation. His ‘career’ as such was more about ideas and inspiring others. Ross oozed rivers of creativity, not seeking grandeur or celebrity status, just simply sharing his sharp wit and intellect in an open genuine good-will way. If only some agency had been found to allow such talent to be more widely shared. He gave his time freely to encourage and benefit others. This was demonstrated in both lawn bowls and the performing arts through mentoring roles he willingly provided. Throughout his life he gave special attention to those less fortunate than him. His lifelong friend Chris MacBean recalls an aspect of this when as young boys they would do the town at Christmas time to sing carols outside the homes of those they knew were doing it tough. He would compose a verse of cheer, or lend an ear, to anyone he knew was going through hard times. Indeed, he would offer his wordsmith and entertainment skills in any way that could help promote the town he loved and its citizens. One song he co-wrote in November 1982, Kyneton Gateway to History, evolved in response to a request for a soundtrack for a short promotional film clip highlighting the local district. With a deadline meaning it had to be written and recorded in a single day, the production was completed successfully on time. Ultimately the song’s title seeded the by-phrase “gateway to history” for the town. As a storyteller across many mediums Ross’s output of work was extraordinary by any measure. Fittingly at a wake in his honour recently the tables were turned, and it was left to all those present to swap stories of the life and times of this brilliant warmhearted man. Ross died peacefully in the Royal Melbourne Hospital on July 1, 2021, and is survived by his children Tom and Luke, and nurtured stepchildren Rebecca and Mathew. - David Sprigg - Tom Oliver - Chris MacBean