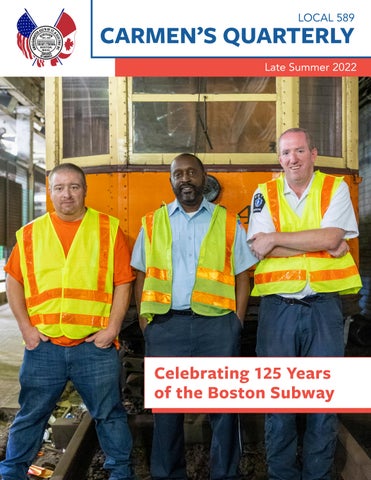 Tweets of Praise / In Memoriam

RESOURCES FOR BENEFITS AND INFORMATION:

PENSION AWARD INFORMATION The content of this newsletter was written prior the arbitrator’s award on the pension. As of the date of publishing, the Executive Board is aware of the arbitrator’s award and is working on finding a resolution swiftly. Updates will be made in real time at monthly union meetings, on the Local 589 website, and in future newsletters. For pension concerns or information, please contact the union hall or your delegate.

In the sad event of a Carmen’s member’s passing, we often receive calls and emails from the spouse concerning benefits and what actions they need to take. Here is some information should you need it — please cut out and save.

Dear Brothers and Sisters, I hope all of you had a very happy Labor Day! Unions have won important victories for all workers, and we continue to fight every day for things like higher wages and safer working conditions. When unions are strong, America is strong! Everyone deserves a safe place to work. As we all know, there have been several safety incidents over the past few months. I would like to take a moment to address these issues: The safety of our membership and the riding public will always be the number one priority for Local 589. Union leadership has been continually engaged with representatives of the FTA and NTSB about these matters. We have also been working with government agencies to implement changes to make the job safer. Throughout this entire process, we have been engaged in discussions and negotiations with

your voice counted by registering to vote and then getting out to the polls!

MBTA management. The union is actively

I want to thank the members of Carmen&#39;s Local

working to get institutional changes made

589 for the hard work and dedication that form

which will immediately improve the safety of

the backbone of our union. When you’re in a

our members. These include the reintroduction

union, you’re not alone. Together, we will keep

of certain work classifications that have been

moving forward and supporting our brothers,

our sisters, and our communities.

candidates who will fight to protect working

families in Massachusetts. Make sure to have

Boston prides itself on being a city of firsts.

lines, but in London, the tube used coal-powered

Among our many historic accomplishments is

having the first subway in America. The Tremont Street Subway, part of today’s Green Line, opened on September 1st, 1897, and will turn 125 years old this year.

To alleviate the concerns of subterranean travel, the Boston Transit Commission painted the tunnel walls white and installed lights that illuminated both the stations and the tunnels

between them. Additionally, the electric traction

transportation in Boston was clear. Streets were

packed with pedestrians, horses, pushcarts, and

in use to power the above-ground trolleys in

streetcars. It was often quipped that one could

Boston, gave the city the ability to run a clean,

walk on the roofs of the trolleys from Park Street

to Scollay Square faster than it would take to ride them.

On its opening day in 1897, the Tremont Street Subway was considerably smaller than it is today.

To solve this problem, Boston envisioned a

With a portal in the Public Garden, it included

tunnel beneath downtown to clear the streets

and speed up the trolleys.

car entered the subway early in the morning on

September 1. The trolley from Allston, operated by Motorman James Reed and his conductor Gilman Trufant, completed the short trip to Park Street without issue.

Some riders were skeptical about traveling

underground, especially those who were concerned by the relocation of a Revolutionary War cemetery during the construction of

its opening day! As America’s first subway, the Tremont Street subway is not only the oldest subway tunnel in North America but also the third oldest still in use worldwide today. In its 125 years of service, the Subway has grown, with extensions to: • The Pleasant Street portal in 1897 (closed 1962) •

Kenmore (and the Comm Ave &amp; Beacon Street portals) in 1932

Boylston Station, but fears quickly subsided and over 100,000 people rode the new subway on

and most recently to the new North Station in 2004.

Additionally, the Tremont Street Subway briefly played host to rapid transit trains from the Main Line Elevated (today’s Orange Line) from 1901 until the Washington Street Subway was finished in 1908. On this historic anniversary, we celebrate all who have dedicated their time to working on the Tremont Street subway, past and present. Thank you for keeping Boston connected!

Chynah Tyler, for State Rep. in 7th Suffolk Tommy Vitolo, for State Rep. in 15th Norfolk Christopher Worrell, for State Rep. in 5th Suffolk Thank you to all our members who got out the vote and made these wins possible. But our work isn&#39;t done. With the primary season over, it&#39;s time to prepare for the general election in November. We need to unite behind candidates at every level of the ballot who will stand up for unions and the working people we represent. It&#39;s never too early to make your plan to vote. Remember these key dates:

from 7 am – 8 pm Elections impact everything from public transportation to our children&#39;s education. Make sure that your vote — and your voice — is heard in November. See you at the polls!

Visit WhereDoIVoteMA.com to find your polling location and other essential voting information.

Quick action can prevent disaster. Just ask Green Line operator Rhea DeSilva, who has been a member of Local 589 for almost three years. She started her career with the MBTA after her sister, an MBTA bus driver for over a decade, encouraged her to apply.

The Broken Track on Packard&#39;s Corner

On April 10, 2022, Rhea was working an ordinary late-night shift when she noticed something

After spotting the broken rail, Rhea tried but

wrong with the rails while passing through

couldn&#39;t get a hold of her dispatcher. &quot;I flag

Packard&#39;s Corner. &quot;I always look at my rail when

down an operator who comes along,&quot; she

recalls, &quot;and sure enough, Jarvis, whom I

first things they teach you—always look at your

worked with at Mattapan, is coming forward. I

said I think the track is broken back there, so

in the right direction, make sure there are no

If Rhea hadn&#39;t acted quickly and flagged down

The training Rhea received has helped make her

her fellow operator, Jarvis Holloman-Slash, there

into one of many skilled operators who work for

could have been a major derailment. &quot;I&#39;m happy

we&#39;re able to prevent any kind of derailment to

notes. &quot;I think about what we do daily. Driving

that particular area,&quot; she says, &quot;because that

that thing is not easy. Keeping the city moving,

street is so busy, and we get a lot of people

pushing people all day every day is not an easy

coming in and out from that area, so that was

Rhea explains why she&#39;s so proud to work for

Rhea credits the training she received from her

instructor, Rich Austin, for giving her the tools

to pick up their kids at the end of the day, we

she needed to successfully prevent a derailment,

&quot;My instructor was amazing. He gave us the tools

where they need to go on a daily basis. When

in our bag to get us going, even though we

during training. You only have a certain amount of time to respond, and he gave us all those tools to build upon.&quot;

Thank you to Rhea and all members of Local 589 for the amazing service you provide every day!

Labor Day Article Happy Labor Day to all Boston Carmen&#39;s Union members! Like every generation since Labor Day was first celebrated in the late 1800s, we take this time to honor the American workers who keep our economy moving — and the labor movement that has made a better life possible for all Americans. Working conditions in 1800s America were grim. People would work 12 hours a day, up to 7 days

Day, we do know that McGuire and Maguire both attended the New York City parade with 10,000

as young as 5, were forced to work the same

While New York was the first state to hold a

long hours for a fraction of the pay. Immigrant workers often faced discrimination on top of these conditions. Labor unions had already existed since the late

celebration, Oregon became the first state to recognize Labor Day as a holiday in 1887 officially. Massachusetts and other states soon followed, establishing the holiday on the first

1700s but began to grow more vocal for change.

swarmed the nation in the following decades after the Civil War. Peter J. McGuire, the founder of the United Brotherhood of Carpenters, proposed a celebration honoring American workers to the Central Labor Union of New York. As a result,

Congress attempted to mend relations with workers by passing a bill making Labor Day a federal holiday, which was signed into law by President Grover Cleveland on June 28, 1894. 128 years later, Labor Day is still celebrated with parades and other festivities as a reminder of the

value of the American worker.

celebrated with a parade through the streets

As the country&#39;s workforce continues to grow

of New York City. McGuire isn&#39;t the only person credited as the father of Labor Day. Historians believe Matthew Maguire may have also proposed the holiday in 1882 while serving as the secretary of the Central Labor Union in New York. Though we may not know who first came up with the idea of Labor

and evolve, labor unions will continue to fight for a better quality of life for working families. Unions provide a collective voice and bargaining power. As Labor Day reminds us of the contributions of the American workforce, we are also reminded of the role, and power unions play in the country&#39;s workforce.

Union benefits don&#39;t stop at the workplace. When you sign up for Union Plus, Local 589 members get access to even more opportunities to save on their healthcare and

prescriptions, higher education, travel, insurance, and more. You can even get discounts on movie tickets and at restaurants. 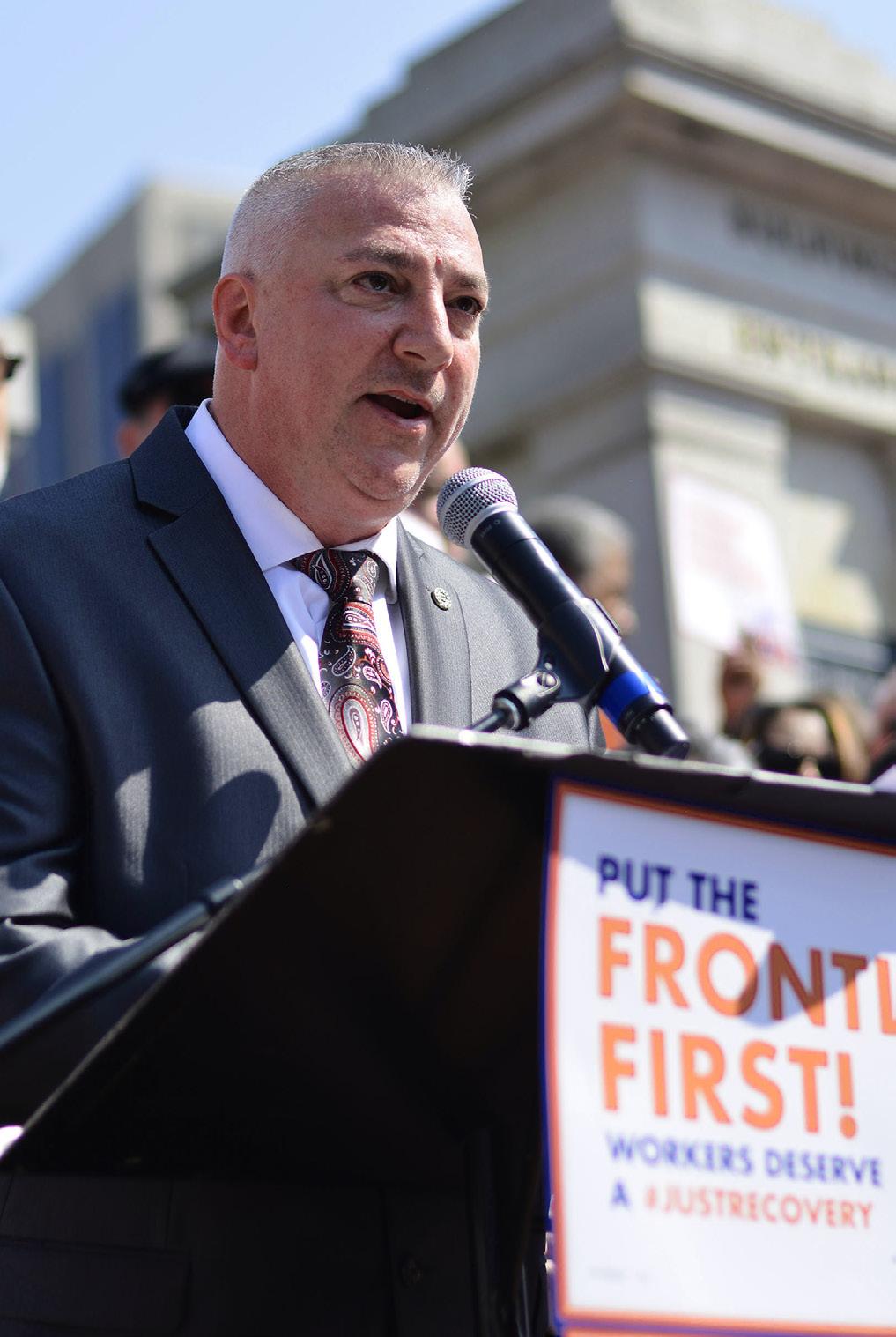 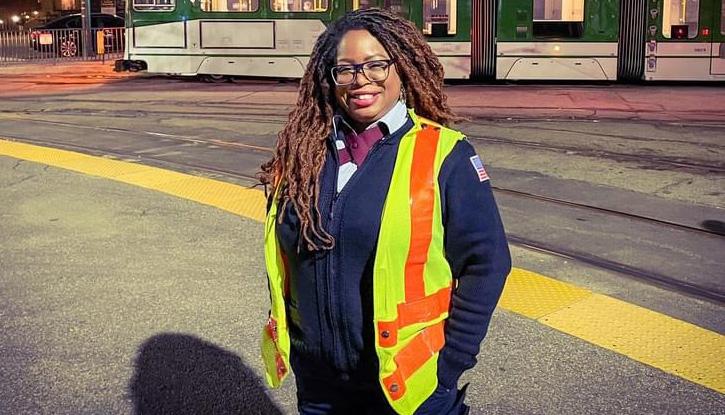 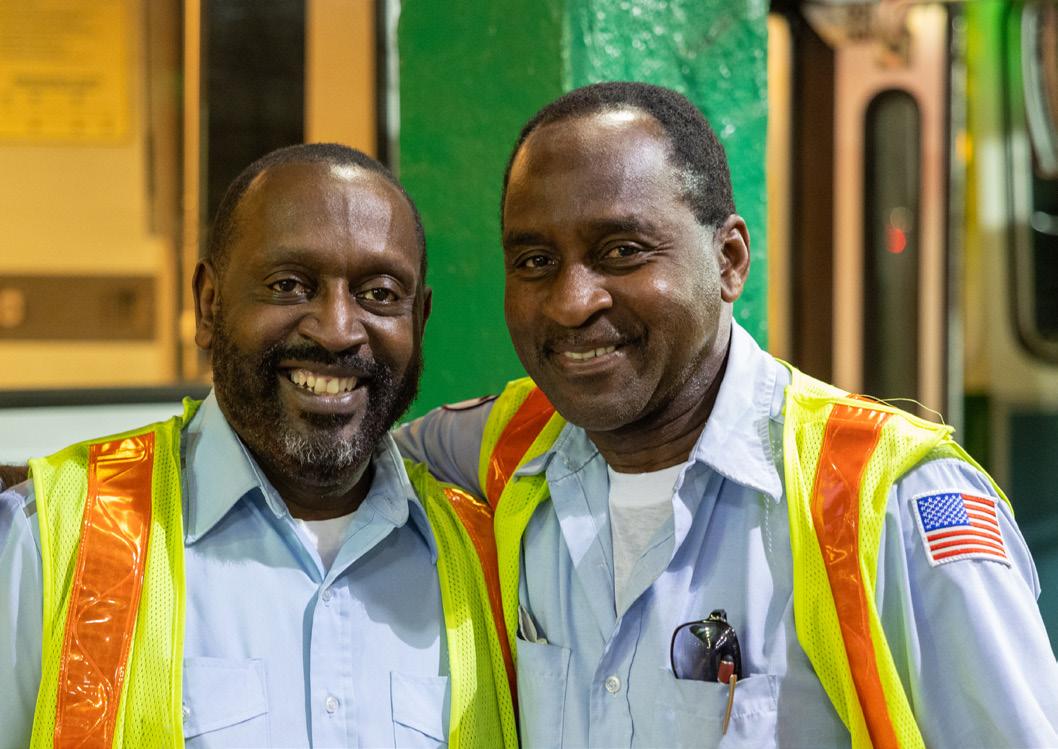