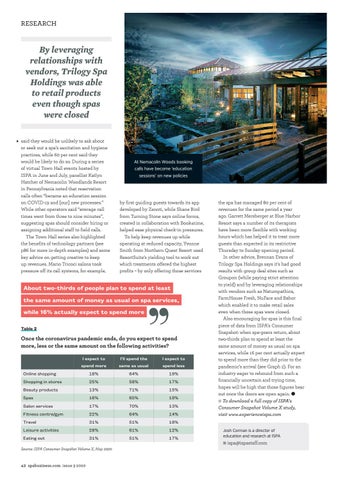 By leveraging relationships with vendors, Trilogy Spa Holdings was able to retail products even though spas were closed said they would be unlikely to ask about or seek out a spa’s sanitation and hygiene practices, while 60 per cent said they would be likely to do so. During a series of virtual Town Hall events hosted by ISPA in June and July, panellist Katlyn Hatcher of Nemacolin Woodlands Resort in Pennsylvania noted that reservation calls often “became an education session on COVID-19 and [our] new processes.” While other operators said “average call times went from three to nine minutes”, suggesting spas should consider hiring or assigning additional staff to field calls. The Town Hall series also highlighted the benefits of technology partners (see p86 for more in-depth examples) and some key advice on getting creative to keep up revenues. Mario Tricoci salons took pressure off its call systems, for example,

by first guiding guests towards its app developed by Zenoti, while Shane Bird from Turning Stone says online forms, created in collaboration with Book4time, helped ease physical check-in pressures. To help keep revenues up while operating at reduced capacity, Yvonne Smith from Northern Quest Resort used ResortSuite’s yielding tool to work out which treatments offered the highest profits – by only offering those services

About two-thirds of people plan to spend at least the same amount of money as usual on spa services, while 16% actually expect to spend more Table 2

I’ll spend the same as usual

I expect to spend less

the spa has managed 80 per cent of revenues for the same period a year ago. Garrett Mersberger at Blue Harbor Resort says a number of its therapists have been more flexible with working hours which has helped it to treat more guests than expected in its restrictive Thursday to Sunday opening period. In other advice, Brennan Evans of Trilogy Spa Holdings says it’s had good results with group deal sites such as Groupon (while paying strict attention to yield) and by leveraging relationships with vendors such as Naturopathica, FarmHouse Fresh, NuFace and Babor which enabled it to make retail sales even when those spas were closed. Also encouraging for spas is this final piece of data from ISPA’s Consumer Snapshot: when spa-goers return, about two-thirds plan to spend at least the same amount of money as usual on spa services, while 16 per cent actually expect to spend more than they did prior to the pandemic’s arrival (see Graph 2). For an industry eager to rebound from such a financially uncertain and trying time, hopes will be high that those figures bear out once the doors are open again. l n To download a full copy of ISPA’s Consumer Snapshot Volume X study, visit www.experienceispa.com Josh Corman is a director of education and research at ISPA n ispa@ispastaff.com