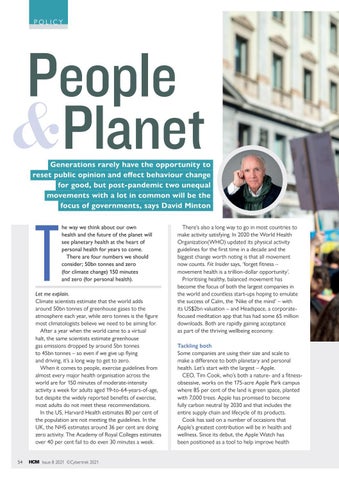 Generations rarely have the opportunity to reset public opinion and effect behaviour change for good, but post-pandemic two unequal movements with a lot in common will be the focus of governments, says David Minton

Let me explain. Climate scientists estimate that the world adds around 50bn tonnes of greenhouse gases to the atmosphere each year, while zero tonnes is the figure most climatologists believe we need to be aiming for. After a year when the world came to a virtual halt, the same scientists estimate greenhouse gas emissions dropped by around 5bn tonnes to 45bn tonnes – so even if we give up flying and driving, it’s a long way to get to zero. When it comes to people, exercise guidelines from almost every major health organisation across the world are for 150 minutes of moderate-intensity activity a week for adults aged 19-to-64-years-of-age, but despite the widely reported benefits of exercise, most adults do not meet these recommendations. In the US, Harvard Health estimates 80 per cent of the population are not meeting the guidelines. In the UK, the NHS estimates around 36 per cent are doing zero activity. The Academy of Royal Colleges estimates over 40 per cent fail to do even 30 minutes a week.

There’s also a long way to go in most countries to make activity satisfying. In 2020 the World Health Organization(WHO) updated its physical activity guidelines for the first time in a decade and the biggest change worth noting is that all movement now counts. Fiit Insider says, ‘forget fitness – movement health is a trillion-dollar opportunity’. Prioritising healthy, balanced movement has become the focus of both the largest companies in the world and countless start-ups hoping to emulate the success of Calm, the ‘Nike of the mind’ – with its US$2bn valuation – and Headspace, a corporatefocused meditation app that has had some 65 million downloads. Both are rapidly gaining acceptance as part of the thriving wellbeing economy. Tackling both Some companies are using their size and scale to make a difference to both planetary and personal health. Let’s start with the largest – Apple. CEO, Tim Cook, who’s both a nature- and a fitnessobsessive, works on the 175-acre Apple Park campus where 85 per cent of the land is green space, planted with 7,000 trees. Apple has promised to become fully carbon neutral by 2030 and that includes the entire supply chain and lifecycle of its products. Cook has said on a number of occasions that Apple’s greatest contribution will be in health and wellness. Since its debut, the Apple Watch has been positioned as a tool to help improve health