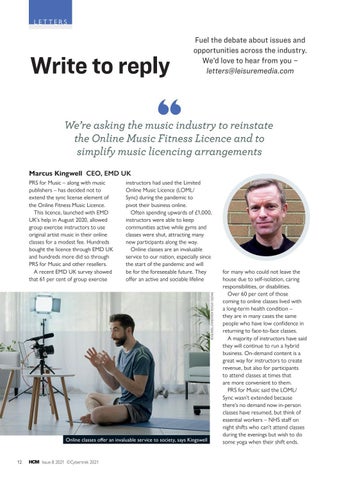 Fuel the debate about issues and opportunities across the industry. We’d love to hear from you – letters@leisuremedia.com

We’re asking the music industry to reinstate the Online Music Fitness Licence and to simplify music licencing arrangements Marcus Kingwell CEO, EMD UK PRS for Music – along with music publishers – has decided not to extend the sync license element of the Online Fitness Music Licence. This licence, launched with EMD UK’s help in August 2020, allowed group exercise instructors to use original artist music in their online classes for a modest fee. Hundreds bought the licence through EMD UK and hundreds more did so through PRS for Music and other resellers. A recent EMD UK survey showed that 61 per cent of group exercise

instructors had used the Limited Online Music Licence (LOML/ Sync) during the pandemic to pivot their business online. Often spending upwards of £1,000, instructors were able to keep communities active while gyms and classes were shut, attracting many new participants along the way. Online classes are an invaluable service to our nation, especially since the start of the pandemic and will be for the foreseeable future. They offer an active and sociable lifeline photo: Stock-Asso/shutterstock

for many who could not leave the house due to self-isolation, caring responsibilities, or disabilities. Over 60 per cent of those coming to online classes lived with a long-term health condition – they are in many cases the same people who have low confidence in returning to face-to-face classes. A majority of instructors have said they will continue to run a hybrid business. On-demand content is a great way for instructors to create revenue, but also for participants to attend classes at times that are more convenient to them. PRS for Music said the LOML/ Sync wasn’t extended because there’s no demand now in-person classes have resumed, but think of essential workers – NHS staff on night shifts who can’t attend classes during the evenings but wish to do some yoga when their shift ends.