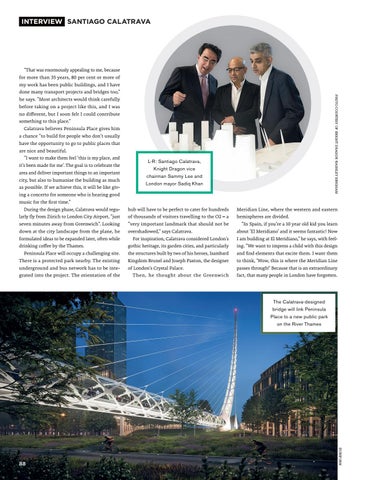 “That was enormously appealing to me, because for more than 35 years, 80 per cent or more of my work has been public buildings, and I have done many transport projects and bridges too,” he says. “Most architects would think carefully before taking on a project like this, and I was no different, but I soon felt I could contribute something to this place.” Calatrava believes Peninsula Place gives him a chance “to build for people who don’t usually have the opportunity to go to public places that are nice and beautiful. “I want to make them feel ‘this is my place, and it’s been made for me’. The goal is to celebrate the area and deliver important things to an important city, but also to humanise the building as much as possible. If we achieve this, it will be like giving a concerto for someone who is hearing good music for the first time.” During the design phase, Calatrava would regularly fly from Zürich to London City Airport, “just seven minutes away from Greenwich”. Looking down at the city landscape from the plane, he formulated ideas to be expanded later, often while drinking coffee by the Thames. Peninsula Place will occupy a challenging site. There is a protected park nearby. The existing underground and bus network has to be integrated into the project. The orientation of the

hub will have to be perfect to cater for hundreds of thousands of visitors travelling to the O2 – a “very important landmark that should not be overshadowed,” says Calatrava. For inspiration, Calatrava considered London’s gothic heritage, its garden cities, and particularly the structures built by two of his heroes, Isambard Kingdom Brunel and Joseph Paxton, the designer of London’s Crystal Palace. Then, he thought about the Greenwich

Meridian Line, where the western and eastern hemispheres are divided. “In Spain, if you’re a 10 year old kid you learn about ‘El Meridiano’ and it seems fantastic! Now I am building at El Meridiano,” he says, with feeling. “We want to impress a child with this design and find elements that excite them. I want them to think, ‘Wow, this is where the Meridian Line passes through!’ Because that is an extraordinary fact, that many people in London have forgotten.