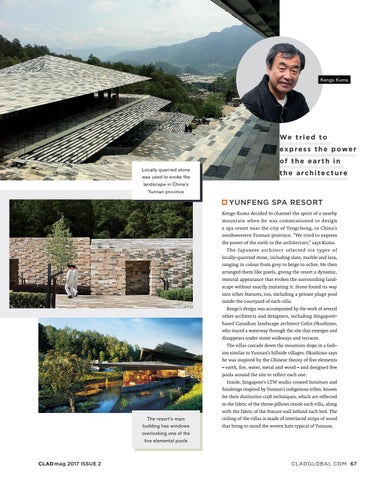 The resort’s main building has windows

Kengo Kuma decided to channel the spirit of a nearby mountain when he was commissioned to design a spa resort near the city of Tengchong, in China’s southwestern Yunnan province. “We tried to express the power of the earth in the architecture,” says Kuma. The Japanese architect selected six types of locally-quarried stone, including slate, marble and lava, ranging in colour from grey to beige to ochre. He then arranged them like pixels, giving the resort a dynamic, textural appearance that evokes the surrounding landscape without exactly imitating it. Stone found its way into other features, too, including a private pluge pool inside the courtyard of each villa. Kengo’s design was accompanied by the work of several other architects and designers, including Singaporebased Canadian landscape architect Colin Okashimo, who traced a waterway through the site that emerges and disappears under stone walkways and terraces. The villas cascade down the mountain slope in a fashion similar to Yunnan’s hillside villages. Okashimo says he was inspired by the Chinese theory of five elements – earth, fire, water, metal and wood – and designed five pools around the site to reflect each one. Inside, Singapore’s LTW studio created furniture and finishings inspired by Yunnan’s indigenous tribes, known for their distinctive craft techniques, which are reflected in the fabric of the throw pillows inside each villa, along with the fabric of the feature wall behind each bed. The ceiling of the villas is made of interlaced strips of wood that bring to mind the woven hats typical of Yunnan.

overlooking one of the fi ve elemental pools