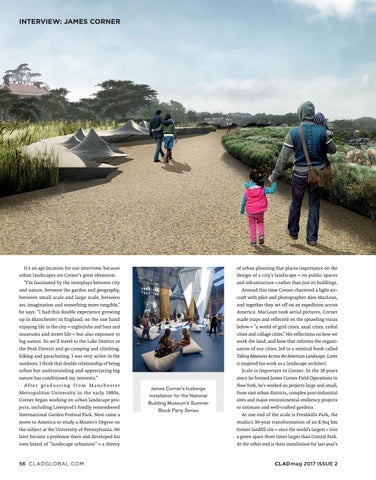 It’s an apt location for our interview, because urban landscapes are Corner’s great obsession. “I’m fascinated by the interplays between city and nature, between the garden and geography, between small scale and large scale, between art, imagination and something more tangible,” he says. “I had this double experience growing up in Manchester in England; on the one hand enjoying life in the city – nightclubs and bars and museums and street life – but also exposure to big nature. So we’d travel to the Lake District or the Peak District and go camping and climbing, hiking and parachuting. I was very active in the outdoors. I think that double relationship of being urban but understanding and appreciating big nature has conditioned my interests.” After graduating from Manchester Metropolitan University in the early 1980s, Corner began working on urban landscape projects, including Liverpool’s fondly remembered International Garden Festival Park. Next came a move to America to study a Master’s Degree on the subject at the University of Pennsylvania. He later became a professor there and developed his own brand of “landscape urbanism” – a theory

of urban planning that places importance on the design of a city’s landscape – its public spaces and infrastructure – rather than just its buildings. Around this time Corner chartered a light aircraft with pilot and photographer Alex MacLean, and together they set off on an expedition across America. MacLean took aerial pictures, Corner made maps and reflected on the sprawling vistas below – “a world of grid cities, axial cities, radial cities and collage cities.” His reflections on how we work the land, and how that informs the organisation of our cities, led to a seminal book called Taking Measures Across the American Landscape. Later it inspired his work as a landscape architect. Scale is important to Corner. In the 18 years since he formed James Corner Field Operations in New York, he’s worked on projects large and small, from vast urban districts, complex post-industrial sites and major environmental resiliency projects to intimate and well-crafted gardens. At one end of the scale is Freshkills Park, the studio’s 30-year transformation of an 8.9sq km former landfill site – once the world’s largest – into a green space three times larger than Central Park. At the other end is their installation for last year’s