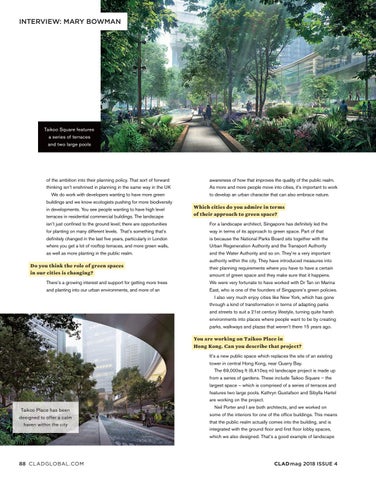 of the ambition into their planning policy. That sort of forward

awareness of how that improves the quality of the public realm.

As more and more people move into cities, it’s important to work

We do work with developers wanting to have more green buildings and we know ecologists pushing for more biodiversity in developments. You see people wanting to have high level terraces in residential commercial buildings. The landscape

to develop an urban character that can also embrace nature.

Which cities do you admire in terms of their approach to green space?

isn’t just confined to the ground level; there are opportunities

For a landscape architect, Singapore has definitely led the

for planting on many different levels. That’s something that’s

way in terms of its approach to green space. Part of that

definitely changed in the last five years, particularly in London

is because the National Parks Board sits together with the

where you get a lot of rooftop terraces, and more green walls,

as well as more planting in the public realm.

and the Water Authority and so on. They’re a very important

Do you think the role of green spaces in our cities is changing?

authority within the city. They have introduced measures into their planning requirements where you have to have a certain amount of green space and they make sure that it happens.

There’s a growing interest and support for getting more trees

and planting into our urban environments, and more of an

East, who is one of the founders of Singapore’s green policies. I also very much enjoy cities like New York, which has gone through a kind of transformation in terms of adapting parks and streets to suit a 21st century lifestyle, turning quite harsh environments into places where people want to be by creating parks, walkways and plazas that weren’t there 15 years ago.

You are working on Taikoo Place in Hong Kong. Can you describe that project? It’s a new public space which replaces the site of an existing tower in central Hong Kong, near Quarry Bay. The 69,000sq ft (6,410sq m) landscape project is made up from a series of gardens. These include Taikoo Square – the largest space – which is comprised of a series of terraces and features two large pools. Kathryn Gustafson and Sibylla Hartel are working on the project. Taikoo Place has been designed to offer a calm haven within the city

Neil Porter and I are both architects, and we worked on some of the interiors for one of the office buildings. This means that the public realm actually comes into the building, and is integrated with the ground floor and first floor lobby spaces, which we also designed. That’s a good example of landscape