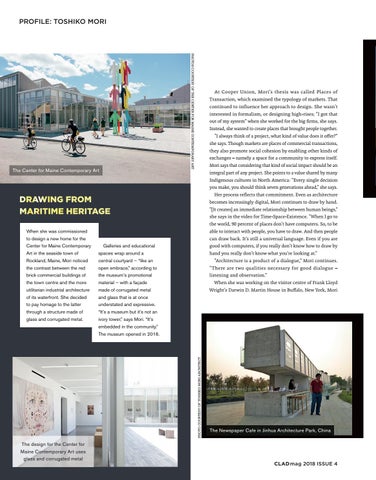 PHOTOS COURTESY OF THE CENTER FOR MAINE CONTEMPORARY ART

The Center for Maine Contemporary Art

At Cooper Union, Mori’s thesis was called Places of Transaction, which examined the typology of markets. That continued to influence her approach to design. She wasn’t interested in formalism, or designing high-rises; “I got that out of my system” when she worked for the big firms, she says. Instead, she wanted to create places that brought people together. “I always think of a project, what kind of value does it offer?” she says. Though markets are places of commercial transactions, they also promote social cohesion by enabling other kinds of exchanges – namely a space for a community to express itself. Mori says that considering that kind of social impact should be an integral part of any project. She points to a value shared by many Indigenous cultures in North America: “Every single decision you make, you should think seven generations ahead,” she says. Her process reflects that commitment. Even as architecture becomes increasingly digital, Mori continues to draw by hand. “[It creates] an immediate relationship between human beings,” she says in the video for Time-Space-Existence. “When I go to the world, 90 percent of places don’t have computers. So, to be able to interact with people, you have to draw. And then people can draw back. It’s still a universal language. Even if you are good with computers, if you really don’t know how to draw by hand you really don’t know what you’re looking at.” “Architecture is a product of a dialogue,” Mori continues. “There are two qualities necessary for good dialogue – listening and observation.” When she was working on the visitor centre of Frank Lloyd Wright’s Darwin D. Martin House in Buffalo, New York, Mori

Art in the seaside town of

spaces wrap around a

the contrast between the red

open embrace,” according to

the town centre and the more

material — with a façade

made of corrugated metal

of its waterfront. She decided

and glass that is at once

to pay homage to the latter

through a structure made of

“It’s a museum but it’s not an