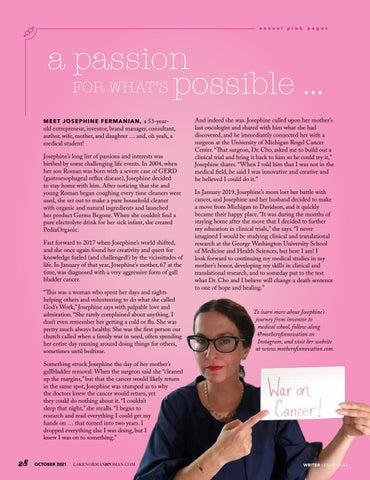 old entrepreneur, inventor, brand manager, consultant, author, wife, mother, and daughter … and, oh yeah, a medical student! Josephine’s long list of passions and interests was birthed by some challenging life events. In 2004, when her son Roman was born with a severe case of GERD (gastroesophageal reflux disease), Josephine decided to stay home with him. After noticing that she and young Roman began coughing every time cleaners were used, she set out to make a pure household cleaner with organic and natural ingredients and launched her product Germs Begone. When she couldn’t find a pure electrolyte drink for her sick infant, she created PediaOrganic. Fast forward to 2017 when Josephine’s world shifted, and she once again found her creativity and quest for knowledge fueled (and challenged!) by the vicissitudes of life. In January of that year, Josephine’s mother, 67 at the time, was diagnosed with a very aggressive form of gall bladder cancer. “This was a woman who spent her days and nights helping others and volunteering to do what she called God’s Work,” Josephine says with palpable love and admiration. “She rarely complained about anything. I don’t even remember her getting a cold or flu. She was pretty much always healthy. She was the first person our church called when a family was in need, often spending her entire day running around doing things for others, sometimes until bedtime.

And indeed she was. Josephine called upon her mother’s last oncologist and shared with him what she had discovered, and he immediately connected her with a surgeon at the University of Michigan Rogel Cancer Center. “That surgeon, Dr. Cho, asked me to build out a clinical trial and bring it back to him so he could try it,” Josephine shares. “When I told him that I was not in the medical field, he said I was innovative and creative and he believed I could do it.” In January 2019, Josephine’s mom lost her battle with cancer, and Josephine and her husband decided to make a move from Michigan to Davidson, and it quickly became their happy place. “It was during the months of staying home after the move that I decided to further my education in clinical trials,” she says. “I never imagined I would be studying clinical and translational research at the George Washington University School of Medicine and Health Sciences, but here I am! I look forward to continuing my medical studies in my mother’s honor, developing my skills in clinical and translational research, and to someday put to the test what Dr. Cho and I believe will change a death sentence to one of hope and healing.” To learn more about Josephine’s journey from inventor to medical school, follow along @motherofinnovation on Instagram, and visit her website at www.motherofinnovation.com.

Something struck Josephine the day of her mother’s gallbladder removal. When the surgeon said she “cleaned up the margins,” but that the cancer would likely return in the same spot, Josephine was stumped as to why the doctors knew the cancer would return, yet they could do nothing about it. “I couldn’t sleep that night,” she recalls. “I began to research and read everything I could get my hands on … that turned into two years. I dropped everything else I was doing, but I knew I was on to something.”