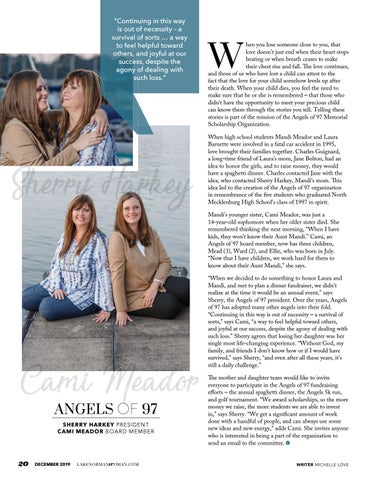 &quot;Continuing in this way is out of necessity – a survival of sorts … a way to feel helpful toward others, and joyful at our success, despite the agony of dealing with such loss.&quot;

hen you lose someone close to you, that love doesn’t just end when their heart stops beating or when breath ceases to make their chest rise and fall. The love continues, and those of us who have lost a child can attest to the fact that the love for your child somehow levels up after their death. When your child dies, you feel the need to make sure that he or she is remembered – that those who didn’t have the opportunity to meet your precious child can know them through the stories you tell. Telling these stories is part of the mission of the Angels of 97 Memorial Scholarship Organization. When high school students Mandi Meador and Laura Barnette were involved in a fatal car accident in 1995, love brought their families together. Charles Guignard, a long-time friend of Laura’s mom, Jane Bolton, had an idea to honor the girls, and to raise money, they would have a spaghetti dinner. Charles contacted Jane with the idea, who contacted Sherry Harkey, Mandi’s mom. This idea led to the creation of the Angels of 97 organization in remembrance of the five students who graduated North Mecklenburg High School’s class of 1997 in spirit. Mandi’s younger sister, Cami Meador, was just a 14-year-old sophomore when her older sister died. She remembered thinking the next morning, “When I have kids, they won’t know their Aunt Mandi.” Cami, an Angels of 97 board member, now has three children, Mead (3), Ward (2), and Ellie, who was born in July. “Now that I have children, we work hard for them to know about their Aunt Mandi,” she says. “When we decided to do something to honor Laura and Mandi, and met to plan a dinner fundraiser, we didn’t realize at the time it would be an annual event,” says Sherry, the Angels of 97 president. Over the years, Angels of 97 has adopted many other angels into their fold. “Continuing in this way is out of necessity – a survival of sorts,” says Cami, “a way to feel helpful toward others, and joyful at our success, despite the agony of dealing with such loss.” Sherry agrees that losing her daughter was her single most life-changing experience. “Without God, my family, and friends I don’t know how or if I would have survived,” says Sherry, “and even after all these years, it’s still a daily challenge.” The mother and daughter team would like to invite everyone to participate in the Angels of 97 fundraising efforts – the annual spaghetti dinner, the Angels 5k run, and golf tournament. “We award scholarships, so the more money we raise, the more students we are able to invest in,” says Sherry. “We get a significant amount of work done with a handful of people, and can always use some new ideas and new energy,” adds Cami. She invites anyone who is interested in being a part of the organization to send an email to the committee. w WRITER MICHELLE LOVE 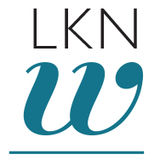