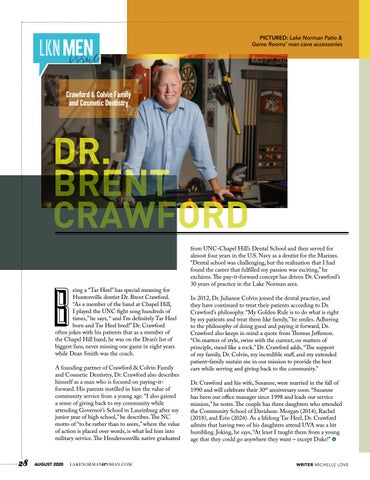 eing a “Tar Heel” has special meaning for Huntersville dentist Dr. Brent Crawford. “As a member of the band at Chapel Hill, I played the UNC fight song hundreds of times,” he says, “ and I’m definitely Tar Heel born and Tar Heel bred!” Dr. Crawford often jokes with his patients that as a member of the Chapel Hill band, he was on the Dean’s list of biggest fans, never missing one game in eight years while Dean Smith was the coach. A founding partner of Crawford & Colvin Family and Cosmetic Dentistry, Dr. Crawford also describes himself as a man who is focused on paying-itforward. His parents instilled in him the value of community service from a young age. “I also gained a sense of giving back to my community while attending Governor’s School in Laurinburg after my junior year of high school,” he describes. The NC motto of “to be rather than to seem,” where the value of action is placed over words, is what led him into military service. The Hendersonville native graduated

from UNC-Chapel Hill’s Dental School and then served for almost four years in the U.S. Navy as a dentist for the Marines. “Dental school was challenging, but the realization that I had found the career that fulfilled my passion was exciting,” he exclaims. The pay-it-forward concept has driven Dr. Crawford’s 30 years of practice in the Lake Norman area. In 2012, Dr. Julianne Colvin joined the dental practice, and they have continued to treat their patients according to Dr. Crawford’s philosophy. “My Golden Rule is to do what is right by my patients and treat them like family,” he smiles. Adhering to the philosophy of doing good and paying it forward, Dr. Crawford also keeps in mind a quote from Thomas Jefferson. “On matters of style, swim with the current, on matters of principle, stand like a rock.” Dr. Crawford adds, “The support of my family, Dr. Colvin, my incredible staff, and my extended patient-family sustain me in our mission to provide the best care while serving and giving back to the community.” Dr. Crawford and his wife, Susanne, were married in the fall of 1990 and will celebrate their 30th anniversary soon. “Susanne has been our office manager since 1998 and leads our service mission,” he notes. The couple has three daughters who attended the Community School of Davidson: Morgan (2014), Rachel (2018), and Erin (2024). As a lifelong Tar Heel, Dr. Crawford admits that having two of his daughters attend UVA was a bit humbling. Joking, he says, “At least I taught them from a young age that they could go anywhere they want – except Duke!” w