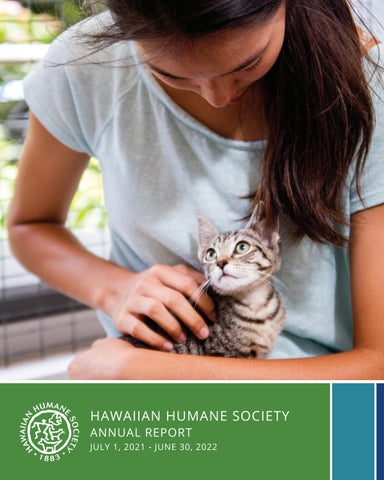 Our fiscal year 2022 annual report reflects the amazing results we can achieve when the community pulls together to help the animals we all love. In 2019, the Hawaiian Humane Society embraced the tenets of Socially Conscious Sheltering, which are a set of principles designed to facilitate the best outcomes for all pet animals in a shelter. The framework is predicated on collaboration with the community at the Socially Conscious Animal Community level. It invites all stakeholders - shelters, rescue groups, policy makers, law enforcement, veterinarians, behavior professionals, human-animal service providers, and individual community members – to do their part to support people and their pets. Addressing the complex challenges of the modern world in ways that prevent suffering; reducing inequity; and supporting healthy, happy lives for all requires a holistic community approach. In these pages, you will see what is possible when our community comes together: • We saw a 23 percent increase in adoptions in FY22. • With the donation of a second dental machine, dental procedures rose a whopping 91 percent, reducing animal suffering. • In one of the most impactful pieces of good news, the loosening of COVID-19 restrictions facilitated a rebound in our education programs, more than doubling the number of children and adults we served in FY21. • Similarly, the rebuilding of our volunteer program resulted in a more than 7 percent increase in our volunteer ranks. These generous community members make invaluable contributions to the welfare of the animals in our care, as well as the level of customer service we are able to offer. • Demonstrating the continued financial need in our community, our Pet Food Bank fed 50 percent more animals than in FY21, which was itself a year of enormous growth for the program. • Spay/neuter increased nearly three percent, including owned animals and those on their way to adoption. Our accomplishments in fiscal year 2022 are laying the groundwork to do even more to support the human-animal bond and the humane treatment of all animals. Construction of Hawaiian Humane Society’s campus in ‘Ewa Beach reached a huge milestone this year, with 60 percent of the project now complete. Having paws on the ground in the Central and West O‘ahu communities will allow us to collaborate with new stakeholders and to work more effectively with existing ones to create better outcomes for animals. Animal issues and human issues are not separate and cannot be addressed in isolation, making collaboration critical. Affordable housing is an animal welfare issue, domestic violence is an animal welfare issue, animal abuse is an animal and human health and safety issue. As a supporter of Hawaiian Humane, your contributions further this multi-stakeholder, Socially Conscious Animal Community approach to animal welfare. Thank you for your support for protecting the most vulnerable among us and for creating a more compassionate community for all.

A welcoming place for animals Hawaiian Humane is O‘ahu’s largest animal welfare organization dedicated to helping local pets and people in need. Our admissions team offers a warm welcome to the animals entrusted to our care and kind understanding to owners who decide that surrendering their pet is the best, most compassionate option. In FY22, we reassessed our capacity and expertise in caring for wildlife and livestock brought to Hawaiian Humane. As a result, we began referring wildlife and livestock to organizations with the expertise to care for these animals rather than admitting them to our shelter and delaying their care. This resulted in a 61 percent decrease in wildlife and livestock admissions. However, overall animal admissions still increased by 2.6 percent compared to FY21.

ANIMALS WELCOMED INTO OUR SHELTER

Adoptions There is no better feeling for our volunteers and team members than seeing pets we’ve come to know and love find their perfect match and go home to a loving family. For many, the process from admission to adoption is quick and easy – including vaccines, a medical exam and spay/ neuter surgery, and they’re adopted as quickly as they are made available. For others, this process is more complicated. Maybe they require special medical care or non-routine surgery to improve their quality of life, or they need a bit more time to come out of their shell. Whatever the case, we work hard to find each adoptable animal a home that will provide them the lifestyle and care they need and deserve – no matter how much time it takes us to make the match. Even with much of the community returning to “normal” in FY22 and spending less time at home, adoptions increased by 23.53 percent compared to FY21.

Spay/Neuter Hawaiian Humane provides spay/neuter services to all cats, dogs, and rabbits in our care. Our Ginny Tiu Community Spay/Neuter Center is also a resource for the pets and people in our community. Spay/neuter services for owned cats, dogs and Free-Roaming cats are offered at an accessible, and sometimes fully subsidized cost. Those familiar with animal welfare are no strangers to the benefits of spaying and neutering pets early in life. Not only does it help mitigate the issue of pet overpopulation, but it also provides a wealth of health and behavior benefits. The practice of Trap-Neuter-ReturnManage is an effective and humane way to lower the Free-Roaming cat population over time. Spay/neuter procedures for Free-Roaming cats through our Ginny Tiu Community Spay/Neuter Center include anesthesia, surgery, a microchip, an ear notch, the FVRCP vaccine and postoperative pain medication.

Shelter Veterinary Services Our shelter veterinary services team offers high-quality, high-volume services to the thousands of animals that enter our doors every year. In FY22, the donation of a second dental machine enabled us to increase the number of in-house dental procedures we perform by 91 percent. We also began vaccinating all cats and dogs upon admission to the shelter, which prevents the spread of common diseases and keeps our shelter population safe and healthy.

With an education-first approach, our Field Services officers work in and with our community to investigate reports of animal cruelty and conduct rescues. Spending much of their day on the road and in our neighborhoods, this team addresses animal-related complaints, assists pet owners in need, transports injured stray animals to medical care, and reunites lost pets with their owners while in the field so they never even have to enter the shelter.

Lost Animals Returned We are O‘ahu’s official pet lost and found. Animals arrive at Hawaiian Humane throughout the day and night, and both our Admissions and Field Services teams work to reunite families with their beloved pets as well as return microchipped Free-Roaming cats to their community caretakers. Our number of reunions went up nearly 13 percent over FY21.

Pets Fostered A robust foster care program is an integral part of our strategy to manage our shelter population and provide the individualized care some pets need before they are ready for adoption into new, permanent homes. Some animals enter our care in need of rest and recovery, socialization or time to grow and our wonderful team of foster volunteers who open their hearts and homes to animals in need make this possible. This team continues to grow, allowing our overall number of animals fostered to increase by 5 percent in FY22.

Volunteers Our volunteers are essential in achieving our mission. We are fortunate to have an ever-growing team of mission-driven, animal-loving volunteers to help us in every facet of running O‘ahu’s largest animal welfare organization. With the loosening of COVID-19 restrictions as well as a complete overhaul of our volunteer program, we were able to grow our volunteer ranks by more than 7 percent this past fiscal year. We are excited to see this passionate team of volunteers grow with us when our second campus opens!

Spay/Neuter With Feline Fix Feline Fix is a program dedicated to providing free spay/neuter surgeries for Free-Roaming cats on O‘ahu and is subsidized by the City &amp; County of Honolulu. Hawaiian Humane administers the program and the Ginny Tiu Community Spay/Neuter Center is one of the several participating clinics across the island. Spaying and neutering Free-Roaming cats and returning them to the areas where they live is an effective and humane way of reducing the number of cats outdoors over time.

Outreach &amp; Education The Pet Kōkua outreach program helps keep pets and people together, which is an integral part of our mission at Hawaiian Humane. This is accomplished through boots-on-the-ground work with the unsheltered population across the island and managing programs like our Pet Food Bank, pet visitation, pop-up pet vaccination and wellness clinics, and more. Our satellite outreach center in Waipahu closed its doors in FY22; however, the number of people and animals served still saw a dramatic increase, as did the amount of food provided to pets in need.

With less stringent COVID-19 restrictions on gatherings and children returning to in-person school in FY22, our education program experienced a boom in demand for in-person adult and youth education. Hawaiian Humane’s education programs include curricula for teachers; a year-long, small-cohort program for high school students; ageappropriate school presentations on animal welfare; service learning projects and much more. In FY22, our number of presentations increased by 58 percent and attendance increased by 192 percent.

Committed To Compassion Hawaiian Humane Society is an independent, local nonprofit organization and we rely on the support of generous donors to help us create a truly Socially Conscious Animal Community. Every donation made to Hawaiian Humane Society goes directly to helping Hawai‘i’s pets and people. As O‘ahu’s largest animal welfare organization, any donation, large or small, does a world of good in the lives of our island’s animals. Mahalo to the donors and supporters who join us in our mission to promote the human-animal bond and the humane treatment of all animals. Your support makes a difference in the lives of local people and pets through more than 30 programs and services.

These numbers were unaudited at the time of publication. A copy of the complete independent auditor’s report is available upon request.

Published by the Hawaiian Humane Society

The Hawaiian Humane Society is a nonprofit education and advocacy organization that shelters, protects, rescues, reunites and rehomes animals. Established in 1883, it is O‘ahu’s largest animal welfare organization helping local pets and people in need. Visit HawaiianHumane.org for more information.