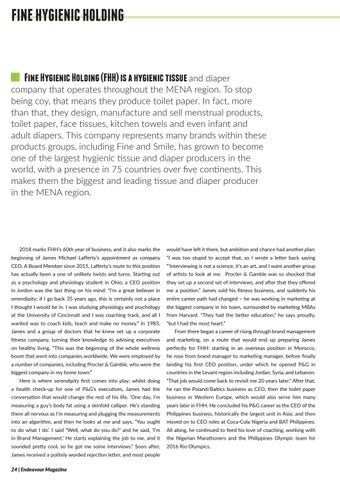 Fine Hygienic Holding (FHH) is a hygienic tissue and diaper

company that operates throughout the MENA region. To stop being coy, that means they produce toilet paper. In fact, more than that, they design, manufacture and sell menstrual products, toilet paper, face tissues, kitchen towels and even infant and adult diapers. This company represents many brands within these products groups, including Fine and Smile, has grown to become one of the largest hygienic tissue and diaper producers in the world, with a presence in 75 countries over five continents. This makes them the biggest and leading tissue and diaper producer in the MENA region.

would have left it there, but ambition and chance had another plan:

“I was too stupid to accept that, so I wrote a letter back saying

CEO. A Board Member since 2015, Lafferty’s route to this position

“’Interviewing is not a science, it’s an art, and I want another group

has actually been a one of unlikely twists and turns. Starting out

of artists to look at me. Procter & Gamble was so shocked that

as a psychology and physiology student in Ohio, a CEO position

they set up a second set of interviews, and after that they offered

in Jordon was the last thing on his mind: “I’m a great believer in

me a position.” James sold his fitness business, and suddenly his

serendipity; if I go back 35 years ago, this is certainly not a place

entire career path had changed – he was working in marketing at

I thought I would be in. I was studying physiology and psychology

the biggest company in his town, surrounded by marketing MBAs

at the University of Cincinnati and I was coaching track, and all I

from Harvard. “They had the better education,” he says proudly,

“but I had the most heart.”

From there began a career of rising through brand management

and marketing, on a route that would end up preparing James

on healthy living. “This was the beginning of the whole wellness

perfectly for FHH: starting in an overseas position in Morocco,

boom that went into companies worldwide. We were employed by

he rose from brand manager to marketing manager, before finally

a number of companies, including Procter & Gamble, who were the

landing his first CEO position, under which he opened P&G in

biggest company in my home town.”

countries in the Levant region including Jordan, Syria, and Lebanon.

Here is where serendipity first comes into play; whilst doing

“That job would come back to revisit me 20 years later.” After that,

a health check-up for one of P&G’s executives, James had the

he ran the Poland/Baltics business as CEO, then the toilet paper

conversation that would change the rest of his life. ‘One day, I’m

business in Western Europe, which would also serve him many

years later in FHH. He concluded his P&G career as the CEO of the

there all nervous as I’m measuring and plugging the measurements

Philippines business, historically the largest unit in Asia; and then

into an algorithm, and then he looks at me and says, “You ought

moved on to CEO roles at Coca-Cola Nigeria and BAT Philippines.

All along, he continued to feed his love of coaching, working with

in Brand Management.’ He starts explaining the job to me, and it

the Nigerian Marathoners and the Philippines Olympic team for

sounded pretty cool, so he got me some interviews.” Soon after, 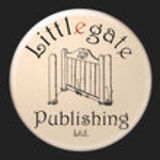