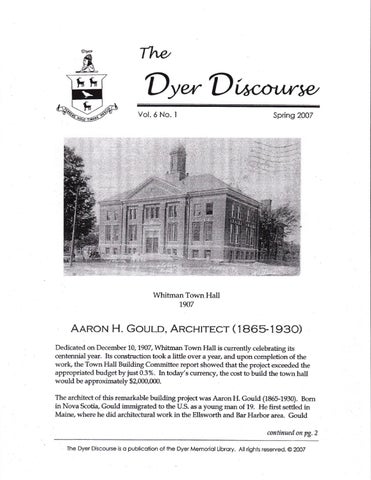 Dedicated on December L0, 1902 Whibnan Town Hall is currently celebrating its centennial year. Its construction took a little over ayear, and upon completion of the work, the Town Hali Building Committee report showed that the project exceeded the appropriated budget by just 0.3%. In today's currency, the cost to build the town hall would be approximately $2000,000. The architect of this remarkable building project was Aaron H. Gould (1865-1930). Bom in Nova Scotia, Gould immigrated to the U.S. as a young man of 19. He first settled in Maine, where he did architectural work in the Ellsworth and Bar Harbor area. Gould

FRov rue DrRecroR When Liz Pretorius and her colleagues at the \Atrhitman Historical Commission came to the Dyer last year to start researching their town hall history in preparation for its centennial, it was surprising to all of us that there wasn't much information anywhere about the buildingls architect. Out of curiosity, we began looking fot arry information on this mystery architect. As we cast our nets wider and wider, a picture b"g* to emerge of an incredibly industrious fiuln who followed the building boom across the country.

Gould's Whitman Town HalI - we wish you all the best on your 100tr anniversary, and may you serve your community for many more centuries. So here's a toast to Aaron H.

married Carrie F. Teague of Tremont, Maine in 1888, and their daughter, Anna was bom the following year. Soon afterwards, the family moved to the South, drawn to the building boom to develop a "New South" amidst the industrialization and urbanization thatwas sweeping the nation. They lived there for five years, during whidr time son Aaron H. Gould, jr. was bom in l&gztnAlabama. However, business probably declined as the effort to industrialize *re South diminished, so they retnrned to New England in 1895. Gould and his family settled in Somerville, Massachusetts, where his youngest child, son Nathaniel, was bom ttratyear.

Goulds Boston firm was in business from L895 to 1910, specializirg io municipal projects. Besides 1 /hitman Town HaIL a number of his buildings in the Greater Boston area are still in use. Among them are Central Middle School in Qnincy (originally built as the first high school), North Cambridge Catholic High School (originally built as the Ellis School, a Cambridge public elementary school), the Cambridge Fire Departnrent's Porter Square Fire House, a Malden fire station which is now a private residence, and the Martin W. Carr School in Somerville (currently in use as a residential buitding) which was included in the National Register of Historic Places ir.1984. Unfortunately, many other buildings designed by Gould have been demolished.

Following his time in the Boston area, Gould spent six years in Portland, Oregon" where he worked on a number of commercial projects including the Erickson Hotel the National Ice Co. ice storage warehouse, the Portland Seed Co. warehouse, and the Rose City Importing Co. building. The Erickson Hotel was notable for its association with Ericksonls Saloon" a well-known workingman's saloon famous for its 684foot long bar, nickel beers, and free meals. After leaving the west coast, Gould settled in Detroit Michigan, with his wife, Carrie, and youngest sorl Nathaniel, who became a civil engineer and joined his fathey's business. The firm of Aaron Gould & Son continued to emphasize municipal projects in its ventures. The buildings that Gould worked on in Michigan include the Wayne County women's prison, the Wayne County Morgue and continueil onpg. 3

Medical Examiner's Office, and a fire station at the Wayne County Training School. Aaron H. Gould died on May 8, 1930 in Detroit. During his prolific career, he was responsible for a considerable assortment of municipal and commercial buildings across the nation. One of his enduring legacies is Whiknan's Town Hall, a venerable building of which the town can be justifiably proud.

Phnrmacies of Olil Abington - An exhibition featuring artifacts and memorabilia from the drug stores in Old Abington. On display tluough L June 2Cf/T.