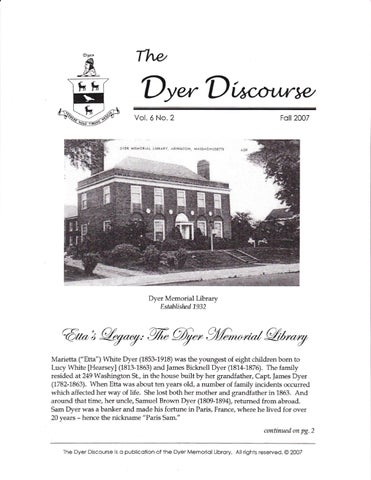 Marietta ("Efta") \Atrhite Dyer (1853-1918) was the youngest of eight children born to Lucy VVhite [Hearsey] (1813-1863) and James Bicknell Dyer (1814-1876). The family resided at 249 Washington St., in the house built by her grandfather, Capt. ]ames Dyer (1782-1863). \Athen Etta was about ten years old" a number of family incidents occurred which affected her way of life. She lost both her mother and grandfather in 1863. And around that time, her uncle, Samuel Brown Dyer (1809-1894), returned from abroad. Sam Dyer was a banker and made his fortune in Paris, France, where he lived for over 20 years - hence the nickname "Paris Sarn" continued on pg. 2 The Dyer Discourse is o publicotion of

Fnov rHe DrnEcroR It's exciting for us to mark the 75tt' anniversary of the Dyer's dedication. The occasion has given us the opportunity to look back and reflect on how the foresight of one woman has affected so many lives. We would like to share the story with you in this issue of the newsletter, as well as through the exhibition current$ on display in the Sam Dyer Room. This celebration has also reminded us to carry on Marietta's legacy and to continue our efforts to be THE community's resource for locai history and genealogy.

Unsettled by the Civil War in his home count4r, Paris Sam refurned to Abington n1862. He built an extensive estate at 277 Washjngton Streef near the Dyer family homestead at249 Washington Street. The mansion was completed ca. 1865.

With no famiiy of his owry Sam invited recently widowed brother, ]ames, and James' children to live in the mansion. Marietta and her siblings grew up in the "Big House," as lt was called, and became very close to their uncle - especially #ter their father's death n1876. Sam died in 1894, aLrnost 20 years after his brother. During those two decades, Sam Dyer assumed the role of family patriarch. And in due course, Marietta stepped into the role of hostess at the estate. Marietta herself never married, and eventually inherited her uncle's estate; she was the last Dyer to live in the mansion. hi.s

Marietta Dyer was a prominent figure in Abington at the turn of the last century, and led the life appropriate to a Victorian lady of her wealth and stature. Since she had no heirs, Marietta's bequest was to "perpefuate by a permanent memorial, the name and memory of the Dyer family, a family which has been identiJied with the development and growth of the Town of Abington from its beginning." To that end, she created a trust under her will and left "provisions for a memoriai building and library." Her attorney, WiliiamJ. Coughlan (1859-1928), ut'td her physician, Dr. Gilman Osgood (1963-1934), were appointed Trustees. Due to the economic sifuation at the time of the will's execution, the Trustees decided to invest the funds and build at a later date. Sadly, Coughlan did not live to see the completion of the library. Upon his death, Horace T. Fogg (1869-1930) was named trustee. Fogg was then president of Rockland Trust Co. He was also one of its founders, as well as of South Scituate Savings Bank. Rockland Trust Company continued on pg. 3

was made the trustee upon Fogg's death, and remains so to this day.

When Fogg died in August L930, he and Osgood had begun the task of building the Dyer Memorial Library on the Centre Avenue property owned by Marietta Dyer. The plans and specifications had just been finalizedwith the architecture firm of ]. Williams Beal, Sons of Boston. In her wilf Marietta stipulated that a third trustee be appointe d " after the completion of said memorial hbrary." Robert Lincoln O'Brien was appointed trustee in 1931. He was one of the feafured speakers at the library's dedication. Dedication of the Dyer Memorial Library took place on Sunday,l May 1932. The front of the building housed the noncirculating collection of the Dyer, which Dr. Osgood had assembled since the creation of the trust. From the day it opened unnl1977, the rear of the building was the home of the Center Abington branch of the town's public hbrary, which began service 1n1878. Marietta also left provisions in her will for the housing of an historical society in the Ilbrary building should one be organized. The Historical Society of Old Abington (HSOA) was established in 1939, and has been in residence here ever since. \u\lhile continuing to be a separate institution, the HSOA is an invaluable partner in the Dyer's efforts to serve the community. The Dyer Memorial Library's mission is to collect and preserve material focusing on the local history and genealogy of the area

known as Old Abington - now Abington, Rockland, and \Alhitman. In 1995, the Trustees refocused the Dyer's mission to

emphasize its library operations, as specified in Marietta's will. We continue to strive to be the repository of local history and genealogy in this area.

Library holdings include books (with an especiaily notable collection of Civil War monographs), manuscripts (historical documents and diaries), early maps of the area, photographic material, as well as fine antique furniture and material culfure artifacts significant to this area's history. Local history resources also include a complete set of town reports and town histories of most of the towns in eastern Massachusetts. For genealogy research, there are volumes of famiiy histories and an almost complete set of published Massachusetts vital records. In addition to the traditional printed information, we recently installed high speed internet access to the building, which allows us to provide web based resources to our researchers. We currently offer access to the genealogy databases of the New England Historical and Genealogical Society, as well as Ancestry.com.

A community's need for history and its preservation continually evolves. To be an effective institutioru we need to recognize and to adapt to those needs. We must also continue to improve our services to meet the community's expectations. Marietta wrote in her will that it was her "purpose and desire to perpetuate by a permanent memorial the name and memory of the Dyer family. ...It is my will and I direct that there be installed... forever an historical and biographical library... to be accessible to the public generally for their free use and enjoyment." ft seems that her wishes have been fulfilled here at the Dyer Memorial Library.

Etta's Legacy - An exhibition to commemorate the establishment of the Dyer Memorial Legacy u..oidit g to the wil1 of Marietta ("Etta") Dyer and its 75 years of service to the community. On display through 2 May 2008. al}a

- 75th Anniversary of the Dyer Memorial Library, THE community's resource for local history and genealogy - Etta's Legacy: An exhibition...

- 75th Anniversary of the Dyer Memorial Library, THE community's resource for local history and genealogy - Etta's Legacy: An exhibition...