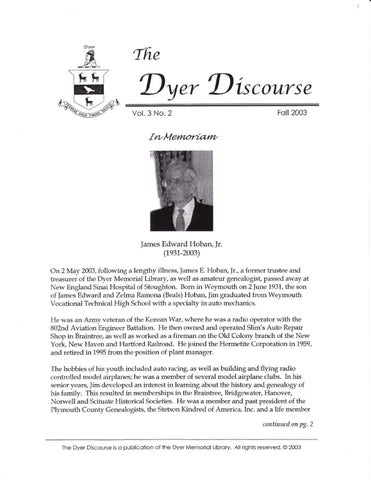 (1e3i-2Aw) On 2 May 2A03, folLowing a lengthy illness, james E. Hoban, jr., a former trustee and treasurer of the Dyer Memorial Library, as well as amateur genealogist, passed away at New England Sinai Hospital of Stoughton. Born in Weymouth on 2 June 1931, the son of james Edward and Zelma Ramona (Beals) Hoban, Jim graduated from Weymouth Vocational Technical High School with a specialty in auto mechanics. He was an Army veteran of the Korean War, where he was a radio operator with the 802nd Aviation Engineer Battalion. He then owned and operated Slirrls Auto Repair Shop in Braintree, as well as worked as a fireman on the Old Colony branch of the New York, New Haven and Harfford Railroad. He joined the Hermetite Corporationinl959, and retired n1995 from the position of plant manager. The hobbies of his youth included auto racing, as well as building and flying radio controlled model airplanes; he was a member of several model airplane clubs. In his senior years, Jim developed an interest in learning about the history and genealogy of

his family. This resulted in memberships in the Braintree, Bridgewater, Hanover, Norwell and Scituate Historical Societies. He was a member and past president of the Plymouth County Genealogists, the Stetson Kindred of America, b:rc. and a life member

The Dyer Discourse is o publicoiion of the Dyer Memoriol Librory. All rights reserved. O 2003

The bad news is that the Dyer has once

Augustus ltVhitman (1821-1880) was born and raised inSouth Abin$on. He was the first son of Jared lzVhitman and his second wife, Susanna p{obart] Hayden. The ltVhitman family's ties to this area began in7636, whenJohn Whitman came from England and settled in Weymouth.

again lost a valued member of our institution. Trustee Jim Hoban passed away a few months ago following a steady decline in his health over the past year. We miss him very much. The good news is that Diane Bryant has joined the Board of Trustees. Diane has graciously hosted our genealogy events for the last few years. I look forward to working with her in expanding the Dyer's genealogy resources.

Our annual fund drive will begin shordy. I look forward to your continuing support of our programs. The holidays are fast approaching, so I d like to wish you all the best for

year after young Augustus completed his education at Phillips Exeter Academy in New Hampshire, he joined the firm of Peter Grinnell & Sons of Providence, RI. From there, his business career took him to Fitchburg, Leominster, and Worcester, where he retired in 1878. Although his life led him away from South Abington, \Atrhitman still owned property in his home town and remained a generous benefactor of the South Abington Congregational Church.

At a town meeting in1879, four years after The Town of South Abington was

friend of li* Hoban, as welt

incorporated" a committee was formed to secure land for a public park. The following year, the committee reported that it had identified potential sites for the new park. One of them was a lot of almost twelve acles on the south side of Essex and Arlington Streets owned by Augustus Whitman, who proposed that he present the town with a clear deed of the property on the condition that the town "keep and use said lot as a public parK' and "survey the land...and adopt suitable plans for the improvement and beautifying of the grounds." The town voted in favor of the offer, and the gift was formally accepted on August 2, 1880. In subsequent years, additions were made thatwould expand the park to approximately fifteen acres.

of the General Society of Mayflower Descendants. Jim

willbe remernbered by the staff and

patrons of the Dyer Memorial Library for his congeniality, his willingness to volunteer, his knowledgeable assistance in genealogy, his advice on car repairs and all things mechanicaf as well as his desire to help one and all in any way possible.

Bsrbara Mercickis alorcg-time anil dear as a fellozu member of the Stetson Kindred of America. She is also a regular patron and supporter of

Augustus Whitman & His Gi{t. kontinuedfrompg.2) In order to fulfill the stipulations of the gift, Ure committee "sought for the best talent procurable," In its 1901 report, the committee stated thaf "owing to the liberal appropriation of the town" it had secured the services of Ernest Bowditch to survey the land and Frederick Law Olmsted to design the park. Bowditch was a leading flrrveyor in New England at the time, and Olmsted was already a renowned landscape architect. Sadly, Augustus Whitmannever saw the completed park. He died in a tragic accident on his estate in Worcester on October 2, 188A - just months after he gave the land for the park to the town. The people of the town, however, never forgot Whihnan's kindness and always remembered him with affection. His sister, Caroline H.lAtrhihran (1819-1891), was also a benefactor who left a generous bequest to the town in her will.

Thus when in 1886 the town adopted a new name, the majority voted for I ftturan - the ultimate honor for the family that has been playing a central role in the community for centuries.

From the beginning, Whitrnan Park has touched the lives of young and old alike. It is a testament to the town and its people that the park has contirmed to evolve over the years to serve the needs of the community. Resources:

IN THE SaIu DyER Roona

- an exhibit of images and memorabfia of once prominent Abington buildings now demolished. 14 October 2003 to 9January 2AA4. Head to Toe: Accessorizing through the Centuries art exhibit of accessories worn to accentuate fashions of the times. 2A lar,-.lluary 2AO4 to 18 ]une 2004.