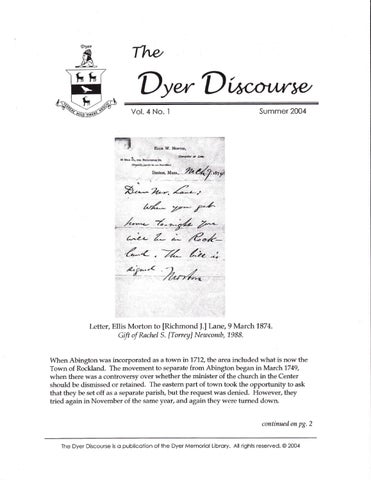 Letter, Ellis Morton to [Richmond ].1 Lane, 9 March 1874. Gift of Rachel S. fTorrey] Neztcomb,1988. When Abington was incorporated as a town in1712, the area included what is now the Town of Rockland. The movement to separate from Abington began inMarch1749, when there was a controversy over whether the minister of the church in the Center should be dismissed or retained. The eastern part of town took the opportunity to ask that they be set off as a separate parish, but the request was denied. F{owever, they tried again in November of the same year, and again they were turned down. continued on pg. 2

FnoIrI THE DIRECTOR The first half of the year has been marked by changes among the Board of Trustees. With some sadness we bid

adieu to our departing trustees, while at the same time we welcome new faces and fresh enthusiasm to the Dy"t. Thanks to you, our annual appeal was a success. Because of that, we will be able to complete Phase I, the research phase, of the Abington history exhibit.

Have a terrific summer!

Not to be deterred, they submitted another request to form their own parish in1767- Archival records are unclear on the outcome of this appeal. Perhaps the matter of an impending war of independence overshadowed local issues. In aty case, East Abington did gain a measure of autonomy in 1812 when it achieved its goal of becoming a separate parish. At the same time, South Abington was also eager to break away. Demographicallp both the east and south wards had outgrown the Center district. By the L850s, population and per capita wealth in East Abington was approximately double that of the Center. I,ltrhile this was understandable, considering that industry was primarily in the outlying areas, it was none*teless a driving factor in the desire to secede.

It appears, however, that there were enough voters against division of the town to forestail the event for another two decades. The final disagreement that brought about the separation of Rockland and Whitman from Abington focused on the expenditure for new

school houses. The school building erected in the Center ended up costing more than twice the appropriated budget while those built in other parts of town were within budget. In a dispute over who would bear the burden of the added cost, neither the eastern nor southern districts fancied paying increased taxes for the financial blunder of the center. This was the last incentive for East Abington to formally file papers of incorporation with the state legislature. Representing the petitioners was Hon. Ellis W. Mortoru Esq. Bom in North Bridgewater in 1849 Morton completed his law studies at [Harvard] La- School in 1861 and began his career as the Asst. U.S. Attomey for Massachusetts; he went on to private practice in Boston.

On the day the bill passed, Morton wrote a note to mark the occasion. Datelined Boston, Mass., March 9,1874, the letter reads "Dear Mr. Lane: When you get home tonight you will be in Rockland. The bill is signed." Morton was undoubtedly writing to one of the sons of Jenkins Lane (1802-1870), patriarch of the Lane family and a prominent shoe manufacfurer in the area. Of the four Lane brothers, the two eldest were especially active in local politics. Richmond ]. Lane (1826-1905\ aniJ-Zenas M. Lane (1828-1913) both held office at the town's incorporation. Because of the lettels provenance*, it seenrc reasonable to assume that the letter was addressed to Richmond Lane.

' ln 1912, the letter belonged to George Torrey, grandson of Lydia Lane, who was Jenkins Lane's sister. If the letter was addressed to ZenasLane, then it would probably still be in his possession at that time, since he was still alive. Furthermore, Torrey lived in the house that was previously the home of R. J. Lane.

TRerrlst-rtorus With reluctance the Board of Trustees has accepted Clare Sullivan's resignation . As chairpersoru Clare successfully guided the Dyer in its growing role as the communit;/s center for local history and genealogy. A few years ago, upon her retirement, Clare moved to Maine; distance and other interests (especially grandchildren) made it difficult for her to maintain her trusteeship. However, Clare has agreed to continue her involvement with the Dyer by working on special projects as needed. As senior member, Mury Rourke has assumed the role of Chairperson of the Board of Trustees.

Meanwhile, another new face has joined the Board of Trustees. We welcome Kathleen Callahan, representing Rockland Trust, to the Dyer. Kathi will take the place of Steve Klern, who has gone on to other ventures. We wish Steve the best of luck in his future endeavors. aaa

AND THE WrrurueR rs... Congrafulations to Susan and Leo Donovan of Abington, winner of the drawing for the RoombarM Robotic FloorVac. Thank you to Robot Corporation of Burlington for donating the prize.

- Rockland (East Abington) splits from Abington and becomes its own town in 1874, - Many thanks to donors who supported the Dyer Library in...

- Rockland (East Abington) splits from Abington and becomes its own town in 1874, - Many thanks to donors who supported the Dyer Library in...